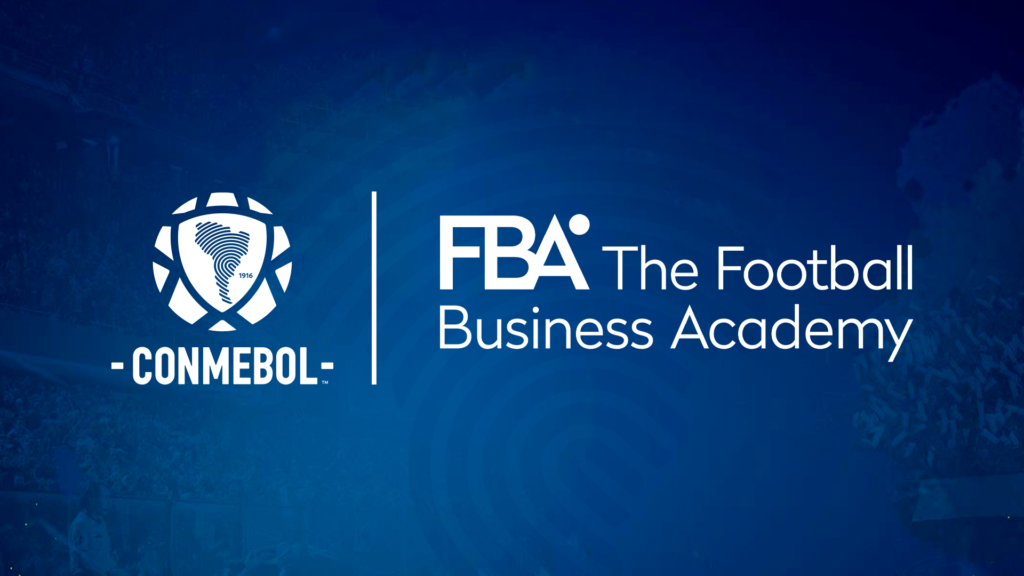 The Football Business Academy and CONMEBOL have entered into an agreement that will see the global leader in football business education and the South American football governing body and one of the FIFA’s six Confederations collaborate.

“This partnership means a great opportunity for both institutions to achieve significant results to promote and develop the South American football industry. With this alliance, CONMEBOL will provide a space for the FBA Candidates to develop their skills and business projects.”

“It is with great pleasure that we welcome CONMEBOL as a brand new Partner and valuable member of our network. We are ready to kick off this great partnership and join forces to keep pushing boundaries and working hard towards a better development and continuous growth of South American football. As an Argentinian I’m proud to see our governing body’s commitment with our mission and seeking for excellence and success through education in its vast aspects and dimensions.”

The Football Business Academy is pleased to welcome The South American Football Confederation into The FBA Family as official partner. This milestone will allow both entities to expand The FBA’s mission of accelerating the professionalization of current and aspiring leaders of the football industry in South America.

CONMEBOL was founded in 1916 being the oldest continental confederation of the beautiful game in the world. The founding football associations were Argentina, Brazil, Chile and Uruguay, and are part of the current 10 member associations together with: Bolivia, Colombia, Ecuador, Paraguay, Peru and Venezuela.

Since 2016, CONMEBOL has carried out a series of structural reforms to modernize its governance and operations, increase the global competitiveness of its exclusive tournaments (CONMEBOL Copa América, CONMEBOL Libertadores and CONMEBOL Sudamericana, among others), and strengthen its promotion of football development through increased revenue and investment. As part of that strategy, over the last two years, CONMEBOL’s professional club competitions have been vastly improved through a new format design and the adoption of standards, designed to increase the quality of the tournaments from the point of view of competitive, sports and commercial entertainment.

Being pioneers in football business education, The FBA sees this partnership as suitable and opportune given CONMEBOL’s current context and promising development, uniting in favour of increasing the capabilities of off the pitch professionals in the Football Industry with a strong focus on areas such as: business development, law, media & broadcasting, communications, academy and stadium operations, finance, CSR and more areas.

The FBA’s Professional Master in Football Business selects Candidates from diverse academic and professional backgrounds who are exposed to real industry knowledge, networking opportunities and practical experience through the 12-months program. With this alliance, CONMEBOL will benefit from our Candidates’ support during internships and Student Business Projects across relevant departments, and will be joining a global network of more than 60 Partners who contribute to the transitioning of our Candidates into the world of football while enriching their teams with a high-quality talent pool.

At the same time, The FBA continues to develop business solutions for various stakeholders in the industry, promoting the training of its internal teams in different areas of expertise that are part of the football business ecosystem through tailor-made courses, workshops, diplomas and certificates, according to their needs.

CONMEBOL is The South American Football Confederation, one of the six FIFA Confederations around the world, and main governing body of football in the south region of the continent (apart from Guyana, Suriname, and French Guiana). CONMEBOL is a non-profit civil association, made up of ten national football associations domiciled in South America. All of them are represented in the different bodies  of the entity, whose highest authority is the Congress, which is held every year in ordinary form, between the months of January to April.

The ten member associations are on a level of equality and balance among themselves, and make up the Confederation’s Council, being represented therein by their respective Presidents.

The associations of Argentina, Chile, Uruguay and Brazil are founding members of CONMEBOL.

Previous post The FBA: 5-year anniversary of the 1st Edition by Raquel Madruga Next post Kresimir Bebic: My Internship at Match IQ