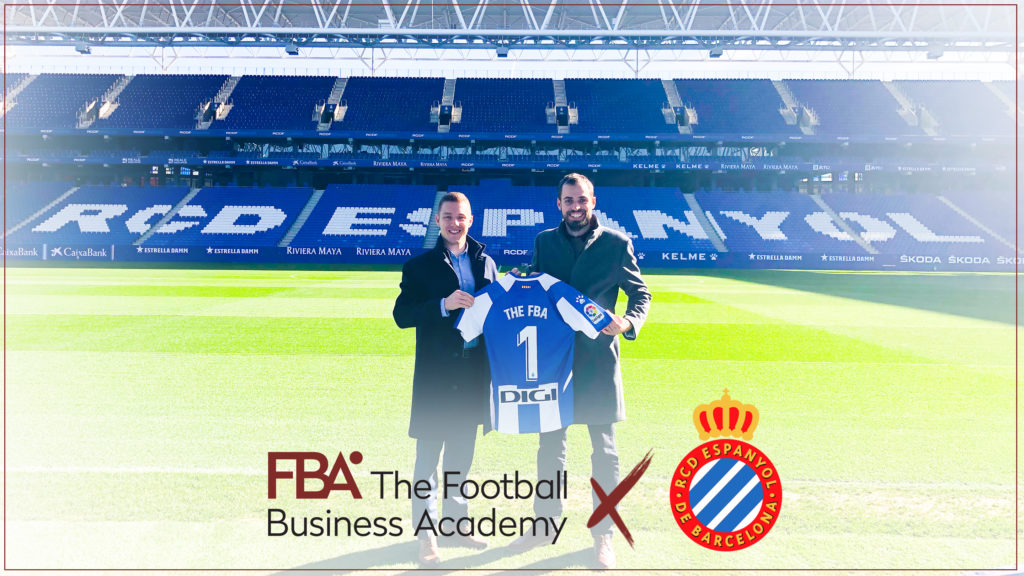 The FBA and RCD Espanyol to Collaborate Through Educational Partnership

The Football Business Academy and RCD Espanyol have entered into an agreement that will see the Swiss educational institution and the Catalan club cooperate.

“Our club is pleased to cooperate with The FBA as part of an educational collaboration. We are engaged with formation, it’s in our DNA, as we were founded by a student in 1900. We have a strong heritage of being a club that places value on the pursuit of excellence on and off the pitch, and the belief in forming the future football industry professionals. FBA students will support our ambitious growth plans and our ongoing international projects.”

“We are delighted to start our collaboration with RCD Espanyol! Our shared family spirit and focus on growing internationally will unlock valuable opportunities for both organizations. Our partnership aims to help the club continue its progress in a variety of business areas through internships and business projects which FBA Candidates will develop as part of this partnership”.

The Football Business Academy is excited to announce its partnership with RCD Espanyol, one of the most historical clubs playing in the Spanish league. The club based in Barcelona plays its home matches at a 40,000-seater RCDE Stadium, also known as Estadi Cornellà-El Prat.

Through this partnership, FBA Candidates will be provided with a learning environment and have an opportunity to immerse themselves into the football world by developing consulting projects on strategic topics for RCD Espanyol and completing internships in a variety of departments within the football club.

RCD Espanyol de Barcelona is one of the most long standing and important clubs in Spain having being founded in 1900 by a student, Angel Rodríguez and functioned as a foundation team of “LaLiga” during its inaugural 1928-1929 season. The club underwent a name change in 1912 from Sociedad Española de Football to Reial Club Deportivo Espanyol when King Alfonso XIII bestowed the “royal” title upon the club. In its long standing history, the club has hit a number of notable milestones which include: becoming Champion of the Copa del Rey four times in its history (1929, 1940, 2000, 2006), the 5th team with most matches played in the Spanish first division, the 2nd team in “LaLiga” with most players from the Academy, twice progressing to the UEFA Cup finals (1988 & 2007) and holding a historical record that saw them go 26 matches undefeated in European competition. The club has 27,000 members and more than 200 fan clubs across the globe.