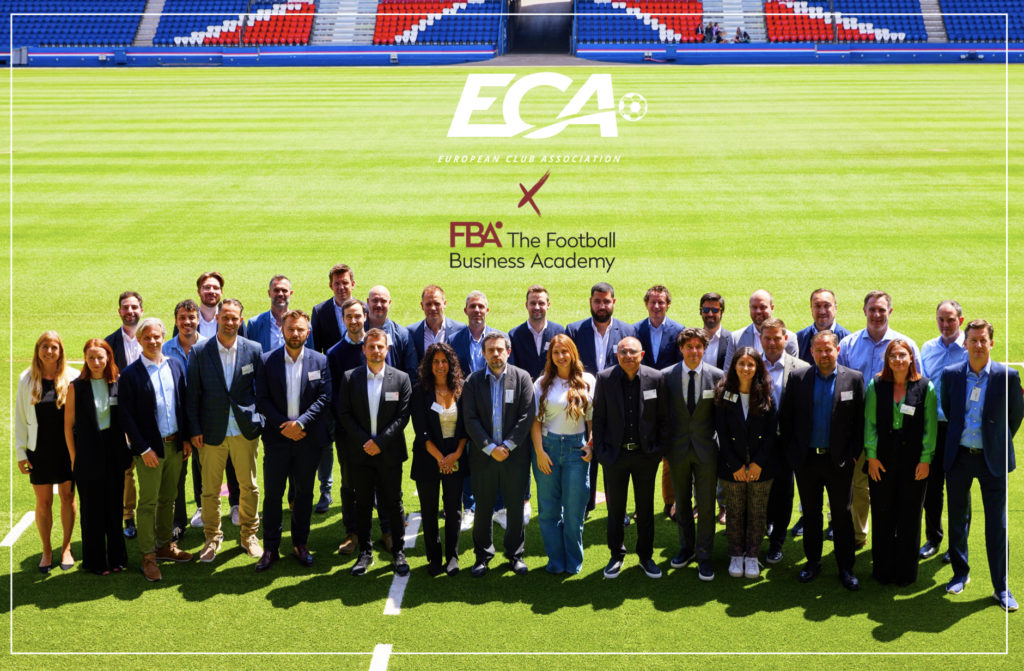 The Football Business Academy (FBA) and the European Club Association (ECA) have entered into an agreement that will see both entities collaborate towards the continued success of ECA’s renowned Club Management Programme.

“We are very happy to be collaborating with The FBA as our delivery partner for this fourth edition of the Club Management Programme, our exclusive executive programme designed to deepen the strategic and operational knowledge of senior club executives.

“With their knowledge of the industry and experience in delivering executive education programmes, The FBA will surely be a key factor in delivering a successful programme for all participants in this latest revised edition of ECA’s Club Management Programme.”

“We are honoured to have been chosen by ECA for the important task of bringing their new vision of the Club Management Programme to life. Football clubs operate in a very complex and fast-paced environment, making it essential for top executives to sometimes take a step back and look at the bigger picture, internalise the different trends and market dynamics, and assess how they should adapt their strategies and decision-making to take their club to the next level. Through this programme, and with our educational experience, we are confident we can help ECA empower its member clubs to make a stronger and more sustainable impact across the European club ecosystem with its various stakeholders.”

As the direct representative for over 240 European clubs, ECA places clubs at the Heart of Football by bringing them, although competitors on the pitch, together as friends off the pitch to drive and inspire the development of the game. Under this premise, member clubs also receive access to various different services including education and knowledge sharing.

Since its creation in 2016, ECA’s Club Management Programme has conducted three successful editions, already producing more than 100 alumni from across Europe. This executive programme provides participants with in-depth knowledge in different areas that affect football club management. In a short period of time it has firmly established itself as a core pillar of ECA’s educational offering with some 30% of the current ECA Board members being CMP alumni.

Following the challenging business requirements brought on by the global pandemic, ECA recognised the rapidly changing environment and increasingly complex set of demands this puts on today’s senior club executives. This is why the fourth edition of the CMP has now evolved to reflect these developments and brings a fresh approach to the programme’s structure, content, speakers, and delivery.

The blended programme, developed and delivered in collaboration with The Football Business Academy and Stockholm Business School, now takes just 12 months to complete, with sessions split into four residential modules taking place in some of the most iconic football venues in the world and one online module. Each session deals with a different topic of club management, from leadership and strategy to club operations, and from technological and social trends to business innovation. The modules comprise a mix of academic lectures, talks from professionals inside and outside the industry, case studies from clubs, as well as interactive group work. As the CMP Delivery Partner, The FBA will mainly support ECA in areas such as content development, speaker management, conducting of sessions and networking events, as well as operational management.

Coinciding with the launch of the new CMP, ECA introduced ECA Campus – a hub of excellence where both junior and senior executives, as well as football’s off-field rising stars, will come together in person or online to network, develop their knowledge and skills, and share best practices. More details on this expanded educational offering will be released in the coming months.

The European Club Association is the sole, independent body directly representing football clubs at European level. Since its creation in 2008, ECA, the ‘voice of the clubs’, has positioned itself as an important and respected stakeholder in the international football landscape. ECA exists to protect and promote European club football. Its aim is to create a new, more democratic governance model that truly reflects the key role of the clubs. ECA acts to strengthen each of the clubs for the benefit of all and to ensure that club football is recognised by decision-makers as the main stakeholder in the game.

The Football Business Academy is a global leader in football business education whose goal is to accelerate the professionalization of the football industry and develop current and future leaders in the game. Founded in 2017 and based in Switzerland, The FBA is best known for its flagship degree – the Professional Master in Football Business – which is a 12-month program with two intakes each year. Furthermore, various football-related stakeholders seek the services of The FBA for the creation and/or delivery of a variety of tailor-made workshops, certificates, or diplomas. Other partners of The FBA include Benfica, Rangers FC, NWSL, Asian Football Confederation, Standard de Liège and Olympique Lyonnais.