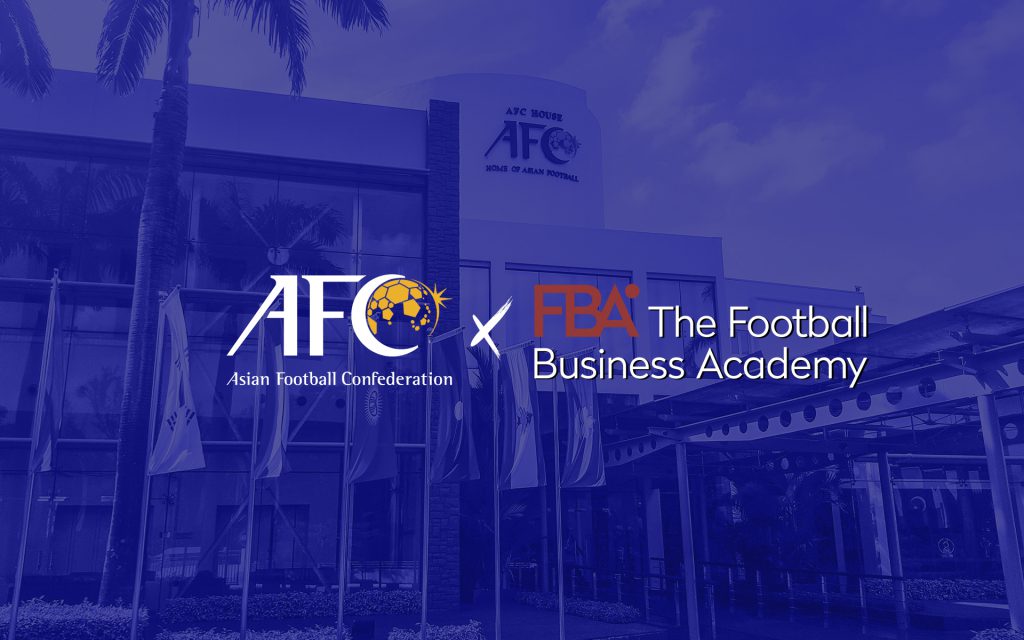 The Football Business Academy and the Asian Football Confederation have entered into an agreement that will see the Swiss educational institution become the Academic Partner of Asia’s football governing body.

The Football Business Academy (FBA) is delighted to announce its appointment as the Academic Partner of the Asian Football Confederation (AFC), the governing body of football in Asia. The appointment comes after a successful evaluation of the proposal submitted by The FBA in response to a Request for Proposal (RFP) issued by the  AFC  for delivering their new Football Management Online Programmes.

The FBA will work with the AFC in setting up their newly launched AFC Academic Centre of Excellence (ACE), a virtual education initiative aimed at developing the skill sets and expertise of future leaders of Asian football. The AFC Academic Centre of Excellence’s educational portfolio will have two main programmes to start with – the AFC Football Management Certificate (FMC) and the AFC Football Management Diploma (FMD), both designed and delivered by The FBA.

Being pioneers in football business education, The FBA’s approach brings together academics and industry professionals to advance the capabilities of future leaders in the Football Industry. This approach has been tailored with relevance to the Asian Football landscape in the designing of the AFC Professional Management Certificate and the AFC Football Management Diploma. A stellar line-up of academics and professionals with substantial years of experience in the industry has been chosen to deliver these programmes.

Becoming the AFC’s Academic Partner is a testament to The FBA for its continued excellence in education in the football industry. The partnership with the AFC provides a chance to create a bespoke educational framework that will teach the next generation of leaders of football in Asia. The FBA and AFC are united with a common objective to deliver educational programmes that will address the different challenges and opportunities existing in football across the continent.

“With the launch of the AFC Academic Centre of Excellence, the AFC is committed to nurturing the future leaders of Asian football by placing a strong emphasis on interactive learning, with a vision and mission to enable football professionals to acquire the knowledge and skills relating to analysis, problem-solving, creativity, and decision-making required in today’s dynamic world of football business.

We truly hope this series of educational programmes will allow the Asian football family to maximise the potential of our football professionals, and at the same time, develop the capabilities of our future leaders in the football community to hand over this great game in even better shape than we inherited it.”

In line with our Vision and Mission, the AFC is committed to maximise the potential of our Member and Regional Associations by providing an internationally recognised education programme that covers a comprehensive curriculum while nurturing football-specific skill sets.”

“With the rich diversity in cultures and incredible passion for football throughout, we have been truly inspired to ensure that this innovative move from the AFC is supported with world class content that is relevant to the varying needs and status of the football Industry across the continent of Asia.

Football is the global language. We are honoured to become the Academic Partner of the Asian Football Confederation. Together we will continue to shape the new generation leaders in the beautiful game.”

More information about these programmes will be released in the coming days.

The Asian Football Confederation (AFC) is the governing body of Asian football and one of the six Confederations making up FIFA. Established in 1954, the AFC is headquartered in Kuala Lumpur, Malaysia, and comprises 47 Member Associations. The AFC organises the AFC Asian Cup and the AFC Women’s Asian Cup, which are the flagship Continental national team competitions, while the AFC Champions League is the premier competition for Asian clubs, drawing millions of fans to the beautiful game across the length and breadth of the Continent and beyond.