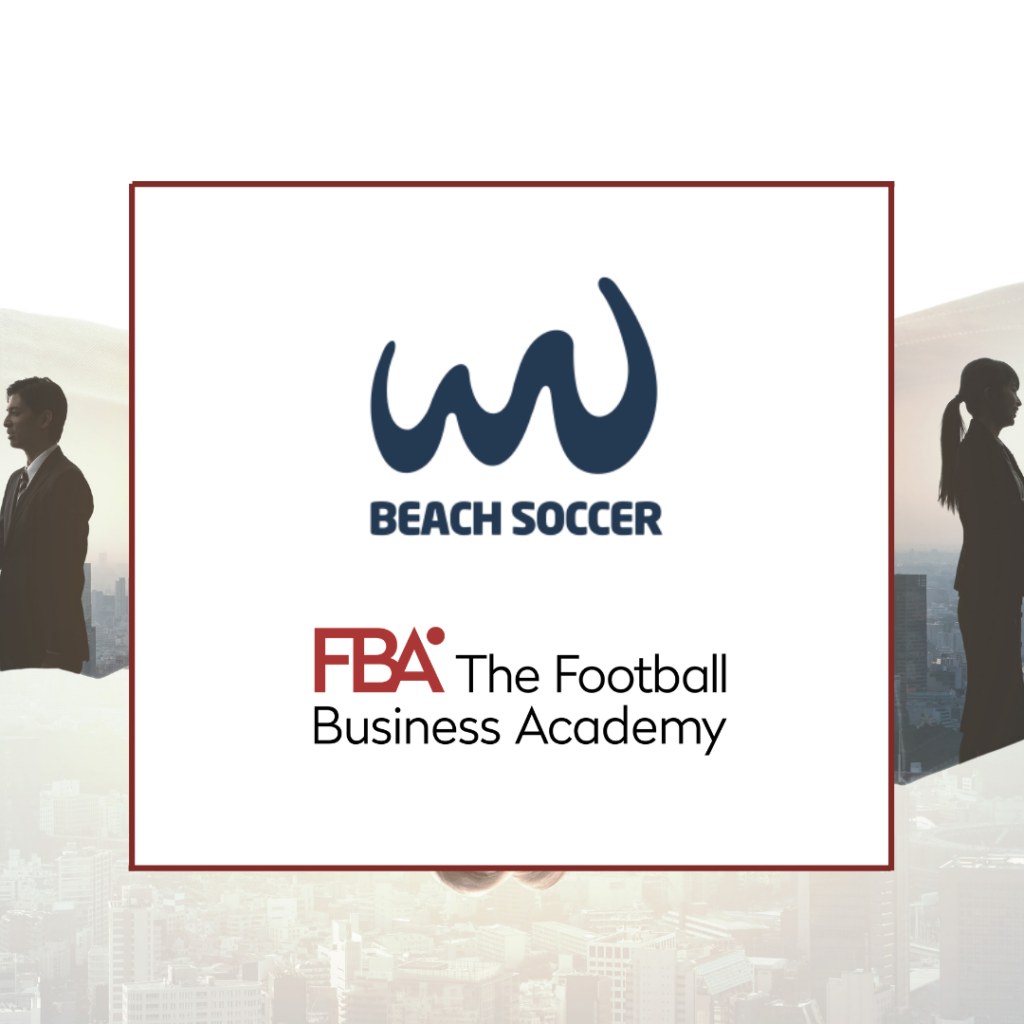 The Football Business Academy and Beach Soccer World Wide have entered into an agreement through which the Swiss Educational institution becomes official Educational Partner of BSWW.

“We are really happy to have reached this collaboration agreement with The FBA, as it will help us improve our operational structure and nurture it with students coming from a very prestigious institution. I am sure this collaboration will bring great results, providing The FBA and their students with a top-notch experiential opportunity in the highest sphere of the world of sports and in a completely international atmosphere, at the time it will help BSWW benefit from talented minds to keep helping improve the sport, our competitions and our programs”

“It is a great honour to welcome Beach Soccer World Wide as Partner of The FBA! Their impact on football fans, football players and the football industry in general has been significant and we are excited to be part of their growth story going forward. This partnership will create fantastic opportunities for FBA Candidates to bring new ideas and perspectives to life for BSWW’s development while allowing them to learn from their experienced staff.”

The FBA is delighted to partner with Beach Soccer World Wide, the major entity behind the creation and growth of Beach Soccer. The Barcelona-based organization is responsible for the organization of the major international beach soccer events, including the BSWW Euro Beach League, the BSWW Euro Beach Cup, the Mundialito and most of the FIFA Beach Soccer World Cup qualifiers, always in cooperation with the different confederations.

Established initially in 1992, the company has played the biggest role in helping to establish the rules of beach soccer, as well as spreading and evolving the sport around the world. Part of the FIFA family since 2005, at that point the Beach Soccer World Championships became the FIFA Beach Soccer World Cup, with BSWW’s staff helping implement and manage the competition while still managing most of the qualification competitions in collaboration with the confederations.

This partnership comes at a time when BSWW is looking to expand its footprint and impact around the world, focusing on providing more access to the sport, more professionalization, as well as a bigger focus on their women’s beach soccer and development programs. It will provide FBA Candidates who are pursuing their Professional Master in Football Business with exciting opportunities to put their knowledge and innovative ideas into practice and support BSWW in different departments and across their various business strategies.

In addition to its role as event organizer, BSWW also focuses, through its Beach Soccer Foundation, on making a difference in areas such as gender equality, community support, sustainability, skin cancer awareness, and youth development.

Beach Soccer World Wide (BSWW) is recognized by FIFA as the major entity behind the creation and growth of Beach Soccer. Since its foundation, Beach Soccer World Wide has organized more than 200 international events in more than 50 countries all over the world, and involving up to 110 National teams from all the continents. More than 2500 players have helped raising the history, the solid structure and the excellent health of the global spectacle Beach Soccer is today, with an audience of 250 million households in 180 countries worldwide. Other partners of BSWW include Puma, LaLiga, Iqoniq, Genius Sports, Universo Mujer, and the United Nations Alliance of Civilizations (UNAOC).

The Football Business Academy is a Swiss-based high level international educational institution whose goal is to professionalize the management of the football industry and facilitate the insertion of qualified professionals and future leaders in the game. Its flagship program, a Professional Master in Football Business, was codeveloped with international football industry experts from around the world around one foremost objective: to provide Candidates with all the necessary tools and an optimal learning environment in order to succeed in this passionate and dynamic industry. Other partners of The FBA include the European Football for Development Foundation (EFDN), Beko, Olympique Lyonnais, Olocip, BazookaGoal, Apollon Limassol FC and Real Mallorca.