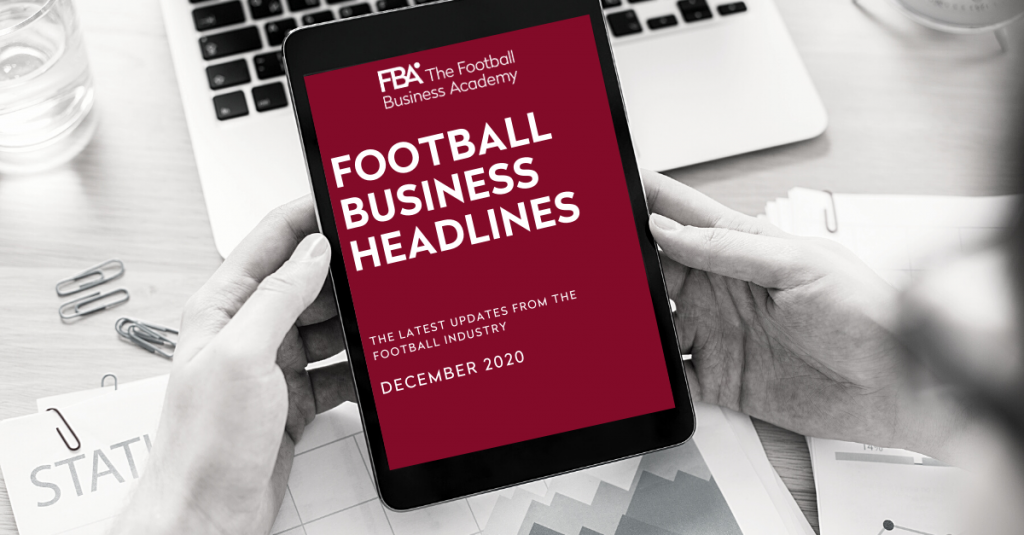 The German Football Association (DFB) has announced a distribution partnership with Berlin-based media business company OneFootball to grow the international reach of the DFB-Pokal. OneFootball will now exclusively stream the DFB-Pokal for free to fans in France, Italy, UK, and Netherlands. (Source)

Media company Sky and Kick It Out have formed a partnership to combat discrimination and advocate inclusion in football. Sky will pledge a £3 million investment package over the next three years and will use their media platforms to amplify Kick It Out’s fight for equality and inclusion in football. Additionally, Sky will also work on a series of initiatives with Kick It Out like educational initiatives to report instances of discrimination online and inside football stadia, and developing annual transparency and insight reports. (Source)

Clothing retailer, H&M Netherlands has agreed on a partnership to become the official partner of the ‘edivisie’, the EA Sports FIFA 21 competition of the Dutch league Eredivisie. In addition to the branding rights, H&M will work with the league to produce content in collaboration with edivisie players in the form of an informative interview series. (Source)

Audi Belgium will become the new esports partner of the Belgian ‘Pro League eCup powered by Eleven Sports’ and the Proximus ePro League. Audi, already a pioneer in supporting esports initiatives will now work closely with the Pro League and Eleven Sports to increase the visibility of esports in Belgium. (Source)

Chinese football club Dalian Pro has collaborated with FIFA for the establishment of a Football Technology Innovation Hub at the club’s academy in Dalian. As part of the collaboration, FIFA will work closely with Dalian Pro for the development of football in China with a focus on research, testing, and developing new standards for new technologies aimed at youth and grassroots football. (Source)

Subscription-based OTT streaming platform DAZN has unveiled a new documentary series called ‘Club Ibiza: The Sessions’ which takes a deeper inside look at Spanish club UD Ibiza. The 5-part series features interviews with the club’s president Amadeo Salvo, Italian football star Marco Borriello amongst many others. The documentary follows the ambitious story of the club to reach the top-flight football competition in Spain, the LaLiga. (Source)

Italian club AC Milan has launched a ‘Manifesto for Equality, Diversity and Inclusion’, a range of initiatives to implement the club’s commitment to sharing positive values of sports to support the fight against all forms of prejudice and discrimination. The four pillars of the manifesto are Awareness, Education, Prevention, and Collaboration. Furthermore, the club has also launched a communication program named ‘RESPACT’ which will help communicate the club’s commitment to values of equity, diversity, and inclusion. (Source)

“Equity, diversity and inclusion are the very cornerstones of the Club’s purpose and long-term vision as well as fundamental human values that can help to drive positive social change. We will do everything possible to mitigate prejudice and discrimination of all kinds and in all circumstances, to nurture more positive attitudes and behaviors within our game and our community. We hope our proposals can be a source of inspiration to others – to drive significant cultural change will require us all to work together.” – Ivan Gazidis, CEO AC Milan

The Union of European Football Associations (UEFA) has released a new documentary called ‘Outraged’ that tackles the issue of discrimination in football. European football superstars from both the men’s and women’s games give their views on racism, sexism, and homophobia in the documentary. The documentary is available to watch for free on UEFA.tv. (Source)

The Asian Football Confederation (AFC) has announced an extension of its partnership with Continental Tires. The German multinational company will continue to be the official Tire partner of the AFC national team competitions. Furthermore, to mark the 150th Anniversary of Continental Tires in 2021, AFC and Continental Tires will launch a digital campaign featuring a series of high-impact content and activities to celebrate the renewed partnership. (Source)

Italian Lega Serie A and Sony Interactive Entertainment have reached a partnership agreement that will see PlayStation 5 become the title sponsor of the 2020 Italian Super Cup. The competition will be rebranded as PS5 Super Cup. (Source)

Lewes Football Club, an East Sussex based club, has announced a significant partnership with Scottish knitwear brand Lyle & Scott. The collaboration includes an in-depth content series, sponsorship of both the women’s and men’s teams, grassroots community outreach, and development of the club facilities. (Source)

The South American Football Confederation (CONMEBOL) held its first Virtual Congress of Women’s Soccer. The event included workshops with experts to professionalize and develop women’s football. Amongst the main agendas of the Congress was the final of a contest held for entrepreneurs. CONMEBOL invited applications to participate in a contest that supports the development and strengthening of Women’s Soccer in the region. 126 applications were received by the Confederation and the three finalists presented their idea at the Congress. (Source)

The World Leagues Forum (WLF), which represents professional leagues and FIFPRO, the global union of football players have signed a cooperation agreement in order to develop more sustainable and effective professional football governance. The WLF and FIFPRO will strengthen their existing ties by designing dedicated pilot projects for their membership in particular outside of Europe on a domestic and regional basis to support the industry and its sustainable development. (Source)

“The WLF is most pleased to develop a common vision with FIFPro to strengthen the structures of social dialog and support the development of the football industry. We are certain that this agreement will benefit the leagues, their member clubs, and the players.” – Jerome Perlemuter, General Secretary, WLF

“We are confident that this agreement with the World Leagues Forum will help our members to develop robust cooperation at both a domestic, regional and international level, and contribute to building a stronger and more sustainable infrastructure for the game.” – Jonas Baer-Hoffmann, General Secretary, FIFPRO

The Major League Soccer Players Association (MLSPA), Black Players for Change (BPC), and Soccer Collective on Racial Equality (SCORE) has announced a formal partnership to combat racism, advocate for all forms of social justice and human rights, and to increase Black, Latinx, women, and LGBTQ representation in all aspects of American soccer. (Source)

Major League Soccer (MLS) club FC Dallas has teamed up with The Football Business Academy partner Tonsser to help with the development and progression of players in the club. The Tonsser app will help the club to track the performances of every player. (Source)

The Asian Football Confederation (AFC) has announced a partnership with United Media Sàrl which will see the Southeast European media company become AFC’s new media partner in Serbia, Bosnia and Herzegovina, Croatia, Montenegro, Albania, Kosovo, Macedonia, Bulgaria, and Slovenia from 2021 to 2024. The deal covers broadcasting of AFC’s major national and club competitions through various outlets including Sportklub channels, one of the most established networks focusing on various premium sports properties. (Source)

American sports footwear and apparel brand New Balance and Japanese J1 League club FC Tokyo have announced a multi-year sponsorship deal. New Balance will cater to the technical and training kits of the club. The deal is a testimony to the American brand’s growth plans for football and to become one of the top 3 global athletic brands. (Source)

The Confederation of North, Central America and Caribbean Football Association (CONCACAF) has announced the structure of new senior women’s national teams’ competitions which will begin in 2021 and include major centralized summer tournaments in 2022 and 2024. The new structure of competitions will transform the state of women’s football across the confederation and will double the number of official senior women’s national team matches. (Source)

“The women’s team faces the same challenges and hurdles as the men’s team and it’s only fair that it receives the same support from our brand with an equal sponsorship.” – Soco Nunez, Marketing Director of Burger King UK.

“The sponsorship from Burger King will be used to help grow the women’s program and support the team.” – Alex Tunbridge, Stevenage FC CEO

Leading online publication ‘These Football Times’ and football media business COPA90 have teamed up to tell the story of Paris Saint-Germain superstar Kylian Mbappe. COPA90’s latest short film ’93 Famille’ tells the story of Mbappe’s rise through the ranks in football from his hometown Bondy in France to being the cover star of FIFA 21. The short film can be seen by clicking here.

FIFA announced the list of successful projects following the call for proposals under the Sport & Health – Africa 2020 initiative. The program was launched in association with the French Development Agency (AFD) in response to the Covid-19 pandemic. The funding granted will allow participating associations to roll out their respective projects. (Source)

The Executive Committee of the Deutsche Fußball Liga (DFL) passed a resolution on the distribution of media revenues for the 2021-22 to 2024-25 seasons. The Executive Committee agreed to a two-stage plan based on four pillars: equal distribution, performance, youth talent, and interest. In the first two years of the upcoming rights period, stability will be weighted higher than variable factors. In the second stage of the future model, the “young talent” and “interest” pillars will be enlarged. The structure of the new media rights can be downloaded by clicking here. (Source)

Chilean Primera Division club Club Universidad De Chile has created an alliance with Socios.com to create a fan token for the club. The alliance will enable fans to access exclusive content and directly influence the decisions of the club as well as participate in exclusive raffles. (Source)

ELEVEN Sport Belgium and the Belgian Jupiler Pro League have come together to launch an esports campaign named ‘Proximus ePro League’ for Belgian football fans. Players from the clubs of the Jupiler Pro League will compete in head-to-head games and all the games will be broadcasted live on ELEVEN’s Pro League channels and on YouTube. The winner of the competition will be given a contract for the 2021-22 season with ELEVEN. (Source)

The South Sudan Football Association (SSFA) will launch its first women’s football strategy designed to span from 2021 to 2024. The strategy is titled ‘Stars Unite’ and aims to build an inclusive and sustainable future for women’s and girl’s football in South Sudan. (Source)

“The plan is to include everyone. We want to continue supporting more women in football through training more coaches, referees, and also the new women’s national league, due to start in February 2021.” – Amin Francis, SSFA President

“We want to show the world that South Sudan is growing in women’s football. We also want to change the mindset of some people who still don’t believe that women can play football.” –  Helen Tarso Aninyesi, Project Manager and Women’s Development Officer, Stars Unite

LaLiga has announced an agreement with Wakatake Group which sees the Japanese company become the official partner of LaLiga for the development of grassroots and the training of coaches in Japan until June 2022. Wakatake Group is a socially responsible, youth development-oriented organization helping young football players pursue their dreams. The alliance includes three stages:

UEFA will launch a new season long men’s football club competition named the UEFA Europa Conference League. The new structure for UEFA club competitions will ensure that at least 34 UEFA national associations are represented in the group stage of one or more competitions. (Source)

“The new UEFA club competition makes UEFA’s club competitions more inclusive than ever before. There will be more matches for more clubs, with more associations represented in the group stages.” – Aleksander Čeferin, UEFA President