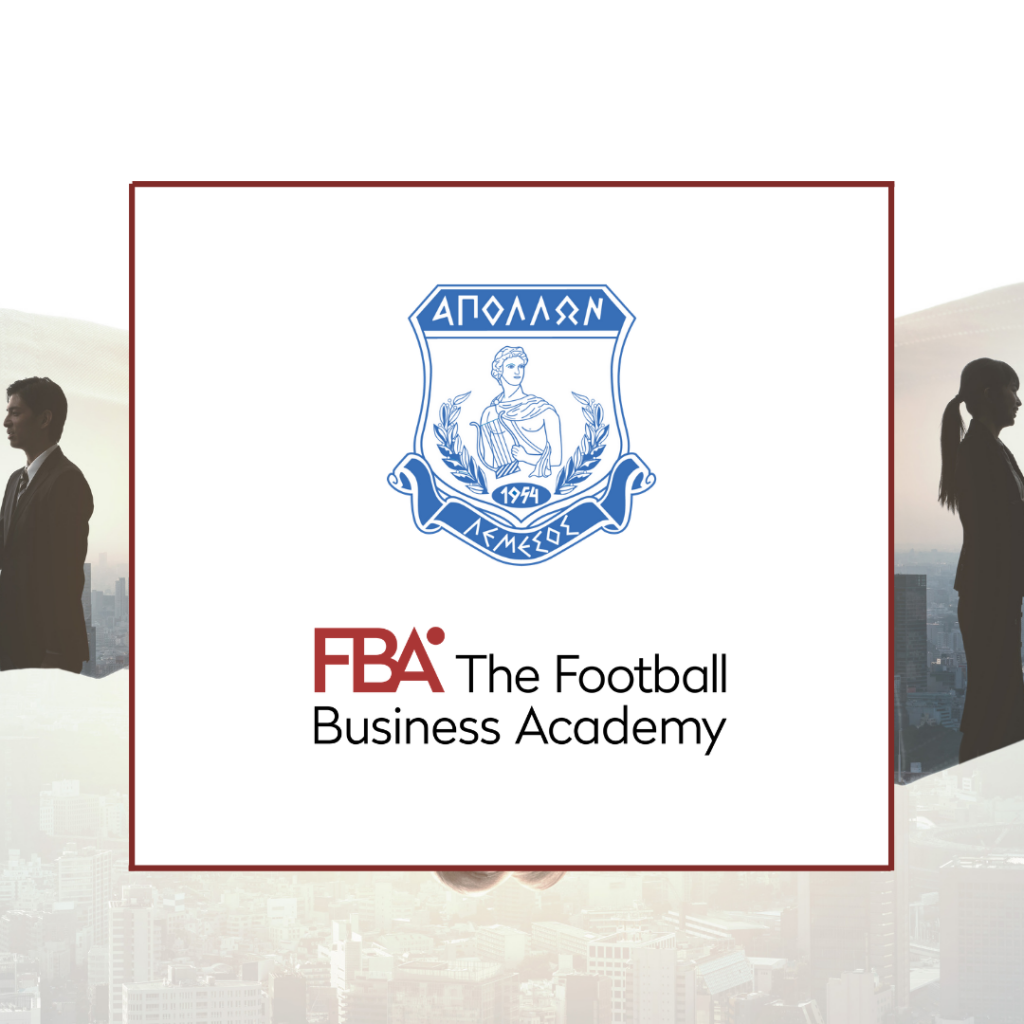 The Football Business Academy and Apollon Limassol FC have entered into an agreement that will see the Swiss educational institution and the Cypriot football club collaborate.

“Over the past decade, Apollon Limassol FC has been in the forefront of the development and modernization of football in Cyprus. Apart from building a football team which is capable of competing and excelling in UEFA competitions, the club has also invested in developing the operational and commercial practices of the club according to the standards set by Europe’s elite clubs. Obviously, recruiting people who are passionate about the football industry and helping them fulfil their potential as professionals, has been a primary objective. We are positive that the educational partnership between Apollon FC and The Football Business Academy will be a stepping stone for the future for our club but also for FBA Candidates, the football executives of tomorrow!”

“We are delighted to welcome Apollon Limassol FC as the new Partner and member of our FBA Family! The club’s progress and forward-thinking approach is a reflection of how we aim to professionalize the football industry. Through this partnership, our Candidates will be able to further develop their practical skills in a variety of departments, as well as support and be part of the significant advancements that will be happening at the club over the next few years. The diverse background and experience of FBA Candidates and Alumni will help the club with their continuous growth and strengthen Apollon FC’s brand on an international level.”

The FBA is excited to partner with Apollon Limassol FC, one of the top clubs in Cyprus, which is located in Limassol, the second largest urban area on the island. The club is aspiring to further establish itself on a European stage and play regularly in the UEFA club competitions.

The current leader of the Cypriot First Division is building a brand new 13,000-seater stadium which is scheduled to open in May 2022 and will include a roof above all stands, a VIP area with hospitality boxes and suites, restaurants, shops, and access and designated areas for disabled people. Moreover, the stadium will be used for concerts, cultural events, exhibitions, as well as for the purpose of sport tourism.

Apollon FC has been delivering CSR campaigns in order to support the local community and combat various societal problems such as hooliganism and racism. The club has also supported the “Welcome Through Football” program by FBA Partners, the European Football for Development Network (EFDN). The aim of the program was to support refugee children and their families with their integration into the local society, using football as the main tool.

This partnership will give FBA Candidates an opportunity as part of their internship, to put their knowledge into practice and support the club in different departments and business operations across the organization. They will also have a chance to work on the strategic projects that will involve the use of the new stadium to increase the dynamic and the potential of the team.

Apollon Limassol FC is a Cypriot football club, based in Limassol. Founded in 1954, Apollon FC currently plays in the Cypriot First Division and has won the championship title three times, the cup nine times and the Super Cup three times. Apollon is considered as one of the most successful clubs in the island and the most successful in Limassol with 15 major trophies and participated four times in the UEFA Europa League Group Stage.

Apollon Ladies FC, their women’s team established in 2007, is the leading club in the country, having won nine consecutive doubles (the league competition and the Cypriot Cup), and has been competing in the UEFA Women’s Champions League tournament.

The Football Business Academy is a Swiss-based high level international educational institution whose goal is to professionalize the management of the football industry and facilitate the insertion of qualified professionals and future leaders in the game. Its flagship program, a Professional Master in Football Business, was codeveloped with international football industry experts from around the world around one foremost objective: to provide Candidates with all the necessary tools and an optimal learning environment in order to succeed in this passionate and dynamic industry. Other partners of The FBA include Benfica, Common Goal, ESSMA, Ukrainian Premier League, PTI Digital, and Girona FC.