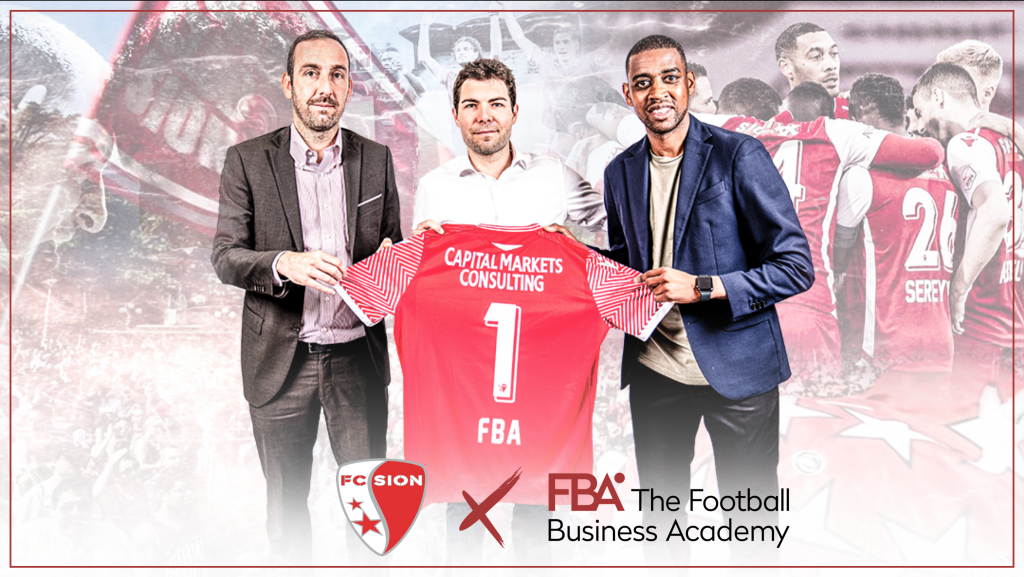 The FBA and FC Sion to Collaborate Through Educational Partnership

The Football Business Academy and FC Sion have entered into an agreement that will see the Swiss educational institution and the Swiss football club collaborate.

“We are very happy to partner with this quality educational institution based in Switzerland. This will allow us at FC Sion to actively participate in creating the next generation of football leaders. We look forward to welcoming students who will bring a new vision and perspectives that can help us grow the club.”

“It is with great pleasure that we welcome FC Sion into The FBA Family. Through their passionate fans and fabulous surroundings in the Swiss mountains, this historic club has all the elements to become an even more formidable footballing institution. We are therefore delighted to support the club through the provision of our educational know-how and access to a Candidate pool that can positively contribute to FC Sion’s development.

The FBA is happy to sign a partnership agreement with FC Sion. The club has won its first Swiss League Championship in 1992 and the Swiss Cup in three consecutive years between 1995-1998, winning the domestic double in 1997, having won both the league and the cup the same year. FC Sion have a 100% winning record in their first 13 appearances in the Swiss Cup Finals.

Through this partnership, FBA Candidates will have an opportunity to immerse themselves into the football industry when developing Student Business Projects and completing their internships at the club. The collaboration will allow them to create marketing strategies, grow the brand of the club and work on a variety of other areas within the football club.

FC Sion is a historic Swiss football, which was founded in 1909 and is based in the canton of Valais. The club plays in the Swiss Super League with games held at the 14,283-seater Stade de Tourbillon located in the city of Sion. FC Sion has won the Swiss Football League two times and the Swiss National Cup 13 times, and competed several times in the European competitions including the 2015/16 season when they have qualified to the UEFA Europa League knockout stages.