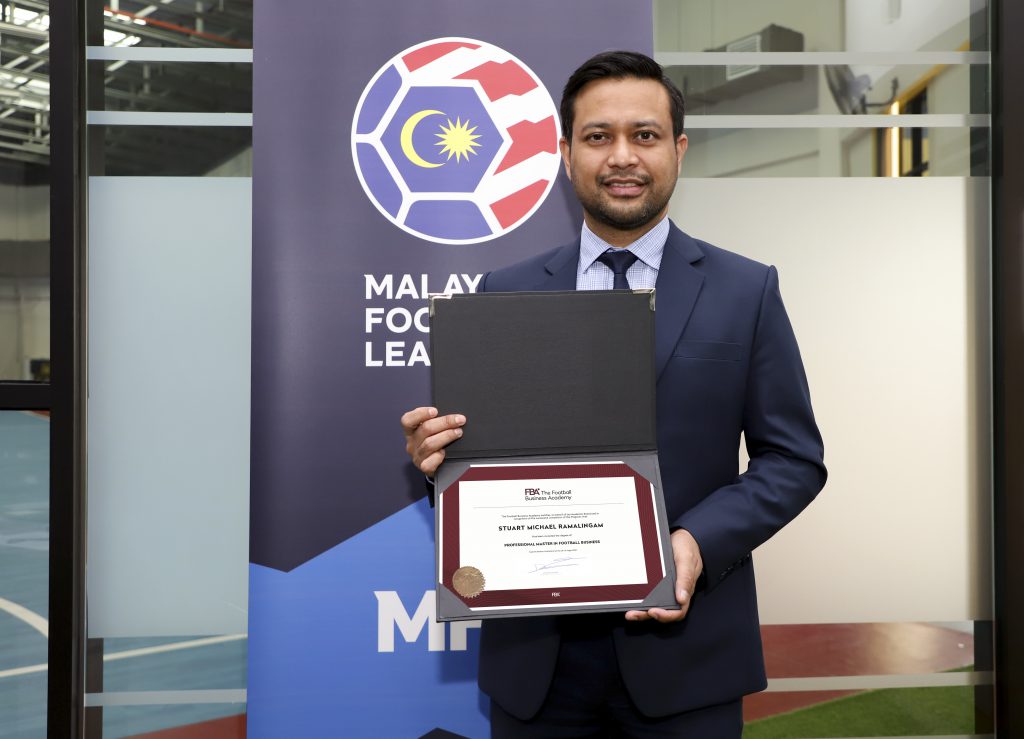 The newly appointed Chief Executive Officer (CEO) of the Malaysian Football League, Mr. Stuart Ramalingam, recently completed his Professional Master in Football Business from The Football Business Academy. The FBA was created in Switzerland in 2017 and is a world-class educational institution dedicated to the football industry.

A motivated and driven individual with more than twenty-plus years of working experience in the football industry, Stuart had the desire to learn more and add to his educational portfolio. Stuart applied to The Football Business Academy having heard about its now renowned Master Program with a view to further develop his mindset and knowledge about the football industry.

“It has been an honor having Stuart go through the master program with us. His professionalism and passion for building a better future for football is inspiring and he has become a very popular member of the Alumni family.”

“On behalf of all the Professors, we were extremely impressed with the input and engagement from Stuart, not only considering the extreme workload and pressure of his day to day working life then as the General Secretary of the FA in Malaysia, but also how he embraced and involved himself with all the candidates who come from a wide range of ages and backgrounds.”

– Dan Wood, Professor of Innovation and Entrepreneurship, The FBA

Stuart Ramalingam’s example is that of a true leader and visionary, who not only wants to continue developing himself, but also instill in the minds of his colleagues that anything is possible. With his experience and immense effort throughout the program, he also achieved the joint-top grades for the graduating edition.

Dorian Esterer continues ‘we wish Stuart the very best for his next career step and we are certain that Malaysian Football will feel the positive impact of his work soon’.

ABOUT THE MALAYSIAN FOOTBALL LEAGUE

With a vision to make football a national pride again, MFL’s efforts to transform Malaysian football are based on four elements; competitive matches in all competitions, positive commercial developments, strong collaboration with stakeholders and increased level of professionalism as well as integrity within the team and league management.