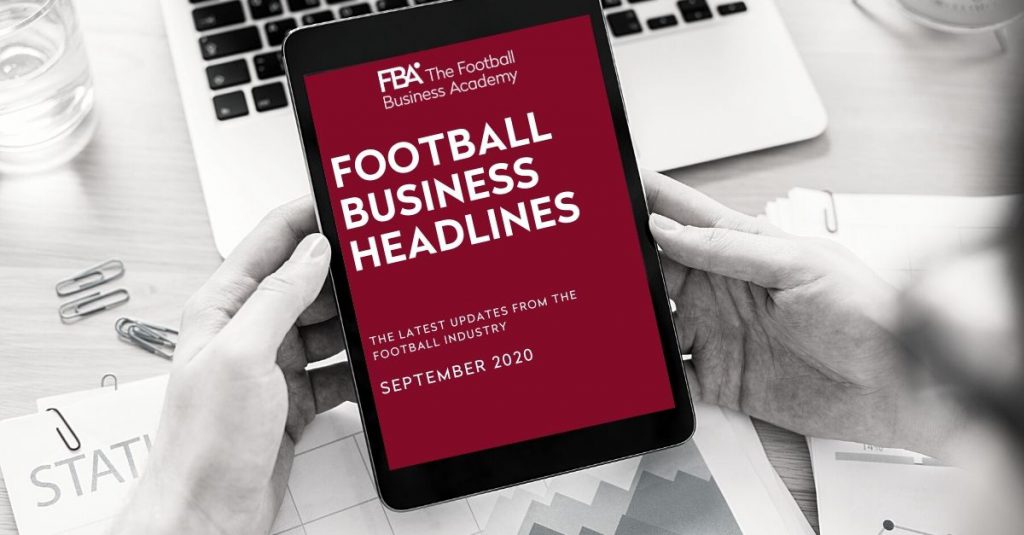 LaLiga has reached an agreement with fan engagement platform IQONIQ to become LaLiga’s ‘Global Fan Engagement Licensed Partner. The three-year deal will see LaLiga content and information included on the IQONIQ platform and will give fans around the world access to information, merchandising offers, match tickets, unique experiences and more. (Source)

Premier League club Manchester City and Puma have launched the club’s first-ever esports jersey.  The kit will be worn by the club’s esports stars throughout the 2020-21 season. Team sponsors Nexen Tire and Etisalat will appear on the sleeve of the new shirt. (Source)

The Sierra Leonian government and Sierra Leone Football Association (SLFA) have jointly announced that both their men’s and women’s football team will now receive equal pay. The decision comes from a motivation to ensure the development of the game and is a massive milestone for women’s football in Africa. (Source)

“In recent years, gender inclusion and equality have been one of the top priorities in global football. Despite the numerous challenges, Sierra Leone has faced in terms of developing our game, I am delighted that we have started to translate aspirations into actions.”  – Isha Johanssen, President, SLFA

Italian football giants, FC Internazionale Milano are introducing Digital Overlay technology at the San Siro stadium, in association with AIM Sport. The technology will allow the club and its partners to geo-locate marketing campaigns displayed on the LED perimeter signage in real-time. (Source)

LaLiga and entertainment resorts PortAventura World have launched a new joint venture entertainment project named ‘Beat Challenge’. The challenge involves a digital interactive game through which users can compete with other users around the world, and receive benefits when they visit the resort. The joint venture also sees a licensing agreement between the two organizations and will give PortAventura exclusive rights in Europe and Russia. (Source)

FIFA has published a new handbook named ‘FIFA Legal Handbook’ in which all the latest FIFA regulations, statutory documents, and relevant circulars can be accessed in one place. The document will be updated annually and is a one place electronic resource for all the statutory and regulatory codes of FIFA. The handbook can be downloaded by clicking here.

Paris Saint Germain and Brazilian star, Neymar Jr has signed a long-term partnership with Puma. The Brazilian will be a brand ambassador for the German brand and will fashion the KING football boot, previously worn by legends Pele and Maradonna. (Source)

Italian club Juventus has partnered up with the global technology and betting company Parimatch through a deal brokered by FBA partners, Entourage Sports & Entertainment. The partnership will create unique entertainment experiences for fans globally. (Source)

AS Roma has announced a new partnership with financial services company Chipper, the Serie A club’s first commercial partnership in Africa. As a part of the partnership, special edition AS Roma X Chipper footballs will be made to distribute to grassroots programs across the African continent. (Source)

Insurance and investment company Vitality will become the sponsor of the Women’s FA Cup in England in a three-year deal through to 2023. The competition will now be rebranded as Vitality Women’s FA Cup. The FA and Vitality will work together to drive the visibility of the women’s game. Earlier last week, Vitality had announced former English player Alec Scott as a brand ambassador. (Source)

“This partnership not only highlights the affection that so many have for the Women’s FA Cup, but it also demonstrates the growing interest in the women’s game, which is something I know Vitality is keen to develop alongside us.”: Kelly Simmons, Women’s Professional Game Director, The Football Association.

The International Olympic Committee (IOC) released a new set of guidelines, ‘Sustainability Management in Sports’, to help sports organizations make their events more sustainable by addressing global issues. The guide advocates the use of systematic approaches and builds on the work done by the Olympic movement stakeholders. The guide can be downloaded here.

The Deutsche Fußball Liga (DFL) and American food company Mondelez International have reached an agreement that will see the latter become the official partner of Bundesliga and Bundesliga 2, from 2021. The partnership involves the use of various sponsorship and image rights, as well as the involvement of stars from Bundesliga Legends Network in events arranged by Mondelez. (Source)

The Brazilian Television System (SBT) and CONMEBOL have agreed on the transfer of broadcasting rights for the cycle from 2020 to 2022 for the broadcast of CONMEBOL Libertadores. Grupo Globo, who were the previous rights holders, repealed the contract. (Source)

UEFA released a new report with information collected on a survey commissioned in 2019 on the topic of training facilities and youth investment across Europe. The report presents an overview of 950 training facilities used by 673 clubs across the continent and also gives an insight into the investment made into youth player development. To download the full report, click here.

A new documentary from LaLiga, ‘LaLiga Sube: Four Cities Fight for the Best League in the World’, is now available to stream on Movistar LaLiga. The documentary follows the journeys from last season of Spanish clubs UD Almeria and Real Zaragoza as well as FBA Partners Girona FC and Elche CF. (Source)

Bundesliga giants, Borussia Dortmund, will launch a girls’ and women’s football department from July 2021. A Borussia Dortmund women’s team will compete professionally from the 2021/22 season. The decision is inspired from the result of a survey of BVB members and football clubs in Dortmund. (Source)

“It is our mission to strengthen women’s football in Dortmund on a broader basis” – Carsten Cramer, Managing Director, Borussia Dortmund

FIFA launches new women’s football development programmes for the 2020-2023 period. All 211 member associations of FIFA are eligible to apply for the program to develop women’s football at the national level on a sustainable basis and bring it to the spotlight. (Source)

The “Manual on ‘TPI’ and ‘TPO’ in football agreements”, the first ever manual on third party influence and ownership, was published by FIFA. The manual provides insights on how to correctly interpret Article 18bis and 18ter of the Regulations on the Status and Transfer of Players (RSTP) and also contains recommendations for stakeholders. A full version of the manual can be downloaded by clicking here.

The Supreme Committee for Delivery and Legacy (SC) compiled the report ‘The FIFA World Cup Qatar 2022 Sustainable Stadiums Report’ which outlines the sustainability features of the 2022 World Cup venues in relation to design, construction and legacy planning. Modular stadium designing, dismountable stadium and recyclable or reusable construction waste are amongst the many key facts which highlight the sustainability of the stadiums. (Source)

The Nigerian Professional Football League (NPFL) and Redstrike Media Nigeria have entered into a strategic and investment partnership to form NPFL Media and Marketing Company, with a vision to commercialize the NPFL. The newly created company will be streaming live matches of the season through its own platform ‘NPFL.tv’. The partnership also involves the creation of a fund that will be deployed for infrastructure development and community outreach. (Source)

The European Club Association (ECA) have published a new report titled ‘Fan of the Future: Defining Modern Football Fandom’. A holistic study on how modern football fans consume the game, the report, provides insights into the impacts fan behaviour have on football clubs. The full report can be downloaded by following the link below. (Source)

The Football Association (England) and Atlanta Media have announced a partnership which will see the Barclays FA Women’s Super League matches to be broadcasted on NBC sports and streamed by DAZN, including live broadcasts in the United States, Germany and Italy. (Source)

American financial services corporation Mastercard has announced the extension of its partnership with Ligue 1 club Olympique Lyonnais. Mastercard will become the official sponsor of the women’s team jersey for the 2020/21 season. (Source)

The Argentinian Football Association (AFA) have unveiled its strategic plans for 2021-2025. There is a clear vision set forward to develop the women’s football in the country by concentrating on youth football for women, club licenses and national competitions. The Women’s Primera A clubs will have at least 12 players on professional contracts from 2021 and a U-16 team for the clubs from 2022. (Source)

“In footballing terms, it will allow us to develop in a general, professional and competitive sense.” –  Mira Villagra, Director of Women’s Football, Lanus

Serie A giants AS Roma and Japanese entertainment conglomerate Konami Digital Entertainment have agreed to an exclusive and long-term partnership. The club’s name, team crest and official kits will be football exclusive to the eFootball PES series. The two companies also have plans to take Roman football to global audience through initiatives like eSports projects. (Source)

Marcelo Claure, an American-Bolivian businessman and CEO of Softbank Group International, has bought 35% shares of Spanish football club, Girona FC. Girona FC is one of the 10 clubs that are part of the City Football Group. The entry of Claure is expected to strengthen the future of Girona. This will be third club that Claure owns a share in, Bolivian team Club Bolivar and MLS team Inter Miami being the other two. (Source)

The 2021 CONCACAF Gold Cup will include Qatar, the 2019 AFC Asian Cup champions, as a guest participant. The Qatari national team will participate in the 2021 and 2023 Gold Cups as part of a collaboration between CONCACAF and Qatar. A strong relation between CONCACAF, Qatari Football Association and Supreme Committee for Delivery and Legacy will also see an initiative that aims at growing grassroot levels in North America, Central America and the Caribbean. (Source)