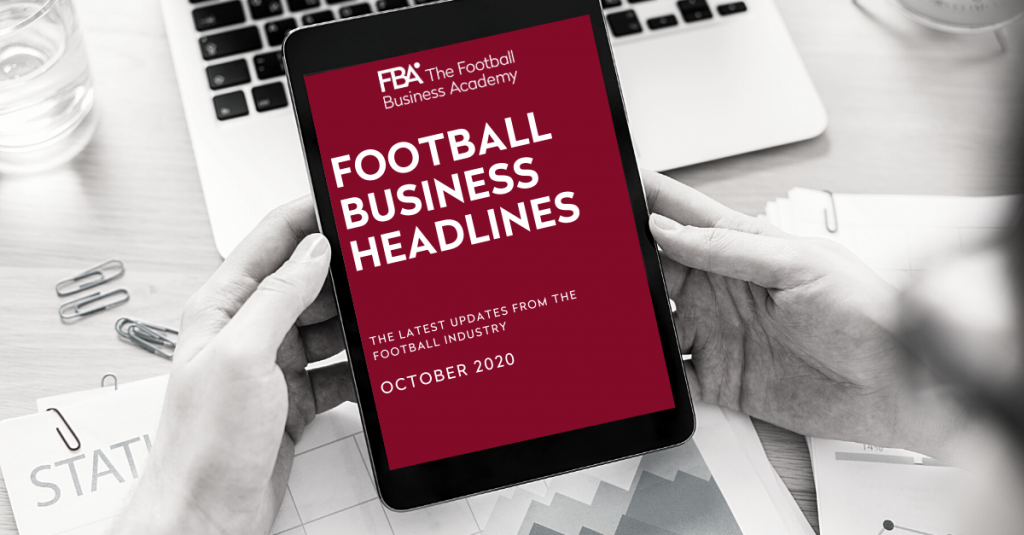 The Royal Belgian Football Association (RBFA), Deutscher Fussball-Bund (DFB) and Royal Netherlands Football Association (KNVB) have joined forces to bid for the hosting of the 2027 FIFA Women’s World Cup. The three federations intend to make further arrangements and draw up a covenant before the end of the year. (Source)

“As a global entertainment brand, LaLiga aims to offer the best product in the world. After the good experience with eLaLiga Santander, the official LaLiga account on Twitch is an opportunity to take the next step in our content and social media strategy. Twitch is a service that allows us to reach a new type of audience and explore new content formats to reach our global fanbase.” – Alfredo Bermejo, LaLiga’s Director of Digital Strategy.

Over-the-top subscription-based sports streaming service DAZN, video-sharing social networking service TikTok, and German football portal Kicker have come together to launch a brand-new Football Hub on TikTok. The new hub will include live streams, hashtag challenges, personal insights into the lives of football players, feature programs and clips, and exclusive behind the scenes football coverage from DAZN. The hub’s in-platform game will also enable fans to bet on the outcome of Bundesliga matches. (Source)

Major League Soccer (MLS) has unveiled a series of initiatives to combat racism, advocate for social justice, and increase Black representation in sport. The initiatives include:

Japan’s professional women’s football league, the WE League has approved the membership of 11 founding clubs ahead of the inaugural 2021-22 season. Seventeen applications were received for the initially planned inaugural season with 6 to 10 teams. Based on the quality of applications received, the selection committee and board of directors approved the applications of 11 clubs, 7 of which are linked to professional men’s clubs. (Source)

Manchester City and Argentina national football team super-star Sergio Agüero has set up his own esports team, KRÜ esports. The organization has stated that a company will be incorporated in Argentina and Barcelona with an aim to be the bridge between the regions. Streaming platform Twitch, gaming brand Aorus, and American company AMD are listed as sponsors. (Source)

Esports Entertainment Group, Inc (EEG) has entered into an agreement with AEG Global Partnerships to become the official esports tournament provider of Major Soccer League (MLS) team LA Galaxy and National Hockey League (NHL) team LA Kings. Under this new agreement, EEG will host branded tournaments for the MLS and NHL team on its Esports Gaming League platform to create new engagement experiences for the fans of both the clubs. (Source)

FIFA has announced a new structure with three dedicated narratives for the 2021 FIFAe tournament. The competitors will have the chance to represent their club in the FIFAe Club Series, compete for national pride and for their countries in the FIFAe Nations Series or create their own legacy in the EA Sports FIFA 21 Global Series on the Road to the FIFAe World Cup. A new prize money pool has also been announced for the tournaments. (Source)

Serie A club AC Milan, together with Google, has created solutions to bring the atmosphere of San Siro to the homes of the club’s fans. The new ‘Milan Action on the Google Assistant’ allows accessing a series of features like news, podcasts, official match line-ups, club choirs, match commentary and more by a simple voice assistant feature. (Source)

Indian Super League club, Bengaluru FC has launched a mental health care program for the team named ‘Care Around the Corner’. Through this program, the club aims to raise awareness of mental health and provide the players and staff with on-call professional help through the season. (Source)

“Mental health in sport is such an important conversation, but it’s also one that we don’t have as much as we should in Indian sport. We felt a definite need to add this aspect to the team for this season, and every season going forward.” – Mandar Tamhane, CEO, Bengaluru FC

Al Rayyan Stadium, one of the proposed venues for the FIFA World Cup Qatar 2022 has been commended for its sustainability features by the Gulf Organization for Research and Development (GORD). In line with the Global Sustainability Assessment System (GSAS), the following certificates were awarded: GSAS Design & Build Certification, GSAS Construction Management Certificate and GSAS Seasonal Energy Efficiency Ratio (SEER) Compliance Certificate. (Source)

Kick It Out, English football’s equality and inclusion organization has launched a new campaign called ‘Take A Stand’. The campaign invites people across the football community to take action or make a pledge in the fight against discrimination. The campaign will be driven through social media channels. Facebook is supporting the campaign by launching new initiatives like a new automated Messenger service that will enable fans to report discrimination on matchdays directly to Kick It Out. (Source)

The French Football Federation (FFF) and the Korean Football Association (KFA) have signed a cooperation agreement until 2024. The new agreement involves several cooperation projects in women’s football, technical infrastructures, amateur football, medicine, and sport science. With respect to amateur football, the KFA will benefit from FFF’s Federal Education Program (PEF), a tool designed for the education and awareness of young graduates. This is the first time that the French federation is promoting this tool internationally. (Source)

Scottish club Rangers FC has signed a partnership with Indian broadcasters Star Sports. The agreement includes the rights for broadcasting the Scottish Professional Football League (SPFL) in India, access to behind the scene content and exclusive airing of the friendly between Rangers and Indian club Bangalore FC scheduled to take place in 2021. (Source)

The jersey sales of new Manchester United Women’s team signings, Tobin Heath and Christian Press, outsold the jersey sales of any of the club’s male players for the first three days after the two USWNT players joined the club. (Source)

Ajax Esports and DAZN group owned football news website Goal have partnered to create exclusive FIFA content in the form of training tutorials that help the players to master the new FIFA 21 game. The content will be available in Europe, the United States and Latin America. (Source)

Swiss club BSC Young Boys will launch a fan token, named $YBO Fan Token, on blockchain-based fan voting and rewards app Socios.com. Using the fan token, the club’s supporters will be able to influence club decisions, vote in polls and earn exclusive rewards linked to the club like meeting the players and watching the game with VIP privileges. (Source)

“We are very proud to have secured a partnership with Socios.com, thus becoming the first club, from the German-speaking region, to be featured on this platform. This partnership perfectly mirrors our strategy to develop the club off the pitch, to become an innovative leader as well as to offer our fans new interaction possibilities. Unlocking new potentials has become ever-more relevant in such unprecedented times.” – Wanja Greuel, CEO of BSC Young Boys

Adidas launched the ‘Adidas Football Collective’, a new movement committed to creating change through football. The project brings together initiatives aiming to empower teams and football communities around the world and adidas will work with local trailblazers to help evolve and develop city specific initiatives. (Source)

Eredivisie, the top-level professional football of Netherlands, has partnered up with Dutch companies Provispo and SciSports to enhance their venture in collecting and sharing sports data. Provispo will install cameras at all Eredivisie clubs which will make it possible to follow all the players on basis of automated intelligence. Using the analysis platform SciSports, coaches, technical directors, and video analysts can analyse and monitor all matches in one place and make comparisons with other clubs to improve their own performance. (Source)

West African country Ivory Coast inaugurated their 60,000-seater Olympic stadium in Ebimpe which will be used for the 2023 African Cup of Nations (AFCON). It becomes the largest stadium in the country and will host the opening and final matches of the 2023 AFCON. (Source)

LaLiga and Liga Portugal have extended their 2017 ‘Memorandum of Understanding’ for a period of three more years, until July 2023. The extension of the agreement sees the two competitions venture into new collaborations in the field of esports, the fight against audio visual piracy, promotion of initiatives to combat racism and xenophobia, and the promotion of grassroots football. (Source)

Major League Soccer club FC Cincinnati has entered into a long-term cooperation with German club TSG Hoffenheim. The partnership envisions a collaboration to advance the development and social progress in knowledge, talent, business, and corporate social responsibility. Highlights of the partnership include the sharing of utilized technology and mutual exchange in scouting efforts. (Source)

Spanish club Athletic Bilbao has signed an innovation agreement with American sports company Senaptec and Israeli business Acceler8 Performance. Senaptec will provide stroboscopic eyewear to the club’s teams which will sharpen the reflexes of the players and improve their reaction time. By using the methodologies of Accelerc8 Performance, the club’s staff will receive proper guidance in relation to visual and sensory training, and will assist the club’s medical services into improving performance. (Source)

LaLiga has created a new hospitality concept called LaLiga TwentyNine’s, which is a new sports bar concept that will promote the league and its clubs around the world. Through this innovative concept, LaLiga becomes the first sports competition to create a licensing model of this kind on a global scale. The concept combines gastronomy, entertainment, football, and esports to drive fan engagement. (Source)

A tour dedicated to deaf people has been created at the Juventus Museum. The contents of the museum were translated into sign language and adds to the Italian club’s continued efforts in making the museum increasingly accessible. (Source)

Spanish club SD Eibar, partners of the FBA, have added to the facilities at their Ipurua Municipal Stadium. The new facilities include a press room, mixed zone, gym for the first team, parking lots, complimentary changing rooms, and a new field of artificial grass. (Source)

“We have had a very clear policy that the resources generated were to create a structure. The structure is here and will culminate in the Club’s most ambitious project, which is the Ciudad Deportiva. Eibar is laying the foundations to be in the elite for a long time”- Jon Ander Ulazia, CEO, SD Eibar

East Bengal FC will become the eleventh addition to India’s top-flight football league, The Indian Super League. The expansion of the league will open new possibilities for Indian football and will add to building a competitive football ecosystem in the country. (Source)

Aurora for Training and Development, in association with the Asian Football Confederation, has expanded its e-Goal program in the ASEAN Zone. The program aims to provide young people more opportunities to live fulfilling loves through football and involves a series of workshops that delves into topics such as philanthropy in football, diversity and inclusion, mental health and civic engagement. (Source)

Previous post Here Are 6 Reasons Why You Should Study At The FBA Next post Lukas Schmidsberger: My Experience at LASK