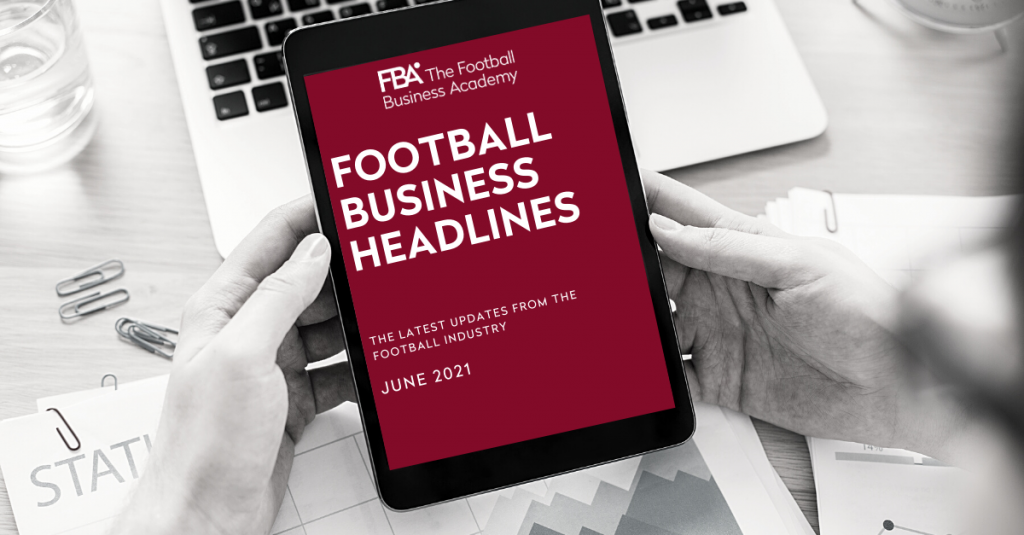 LaLiga has announced a partnership with social media platform ‘Helo’ in Indonesia to enhance the fan engagement avenues of its fans in the country. As part of the partnership, LaLiga will share the latest information about the league, highlights of the games, matchday statistics, videos, articles, official LaLiga matches photographs, and many more on its official Helo account. The one-year partnership between LaLiga and Helo is the first such collaboration for a European football league. (Source)

“The launch of the $POR Fan Token will allow us to create new ways of reaching our supporters and interact with them in new and innovative ways. This will create new opportunities to engage fans with the Portuguese Team like never before, providing them with exclusive benefits, experiences and rewards.” – Nuno Moura, Chief Marketing Officer, FPF

“Now more than 35 million fans in Brazil and many more across the world will be able to interact with SC Corinthians in exciting ways, from wherever they are. These teams strongly demand a breakthrough in the digital environment, this is a very significant step that proves our focus on modernization.” – Duilio Monteiro Alves, President, SC Corinthians

English Football League Championship side Barnsley FC has signed with The Football Business Academy partner Horizm. Barnsley will gain better insights into the value of their different digital assets and how they can be best used to unlock new revenues for the club by using Horizm’s real-time, AI-powered platform. (Source)

Serie A giants Juventus FC launched their first NFT (non-fungible token) to commemorate 10 years since the inauguration of their home Allianz Stadium. The club’s first NFT will be a three-dimensional, high-definition replica of the team’s home shirt for the upcoming season. The Italian club partnered up with California-based company NFT Pro for this venture. The club clarified its awareness of the blockchain’s energy consumption and environmental impact. As such, they revealed that they would utilize the sustainable Palm protocol for their NFT collection. (Source)

UEFA approved the proposal to remove the away goals rule from all UEFA club competitions (men, women, and youth) as of the qualifying phases of the 2021/22 competitions based on the recommendations of the UEFA Club Competitions Committee and the UEFA Women’s Football Committee. The abolition of this rule now means ties in which the two teams score the same number of goals over the two legs will be decided on two 15-minute periods of extra time at the end of the second leg. If the teams score the same number of goals or no goals during this extra time, kicks from the penalty mark would determine the team that qualifies to the next stage of the competition. (Source)

“It is fair to say that home advantage is nowadays no longer as significant as it once was. Taking into consideration the consistency across Europe in terms of styles of play, and many different factors which have led to a decline in home advantage, the UEFA Executive Committee has taken the correct decision in adopting the view that it is no longer appropriate for an away goal to carry more weight than one scored at home.” – Aleksander Čeferin, UEFA President

Major League Soccer (MLS) has announced its plans to launch a new professional league in 2022 that will complete the player pathway from the youth development platform MLS NEXT to the professional ranks. The new competition will also open the door for new owners and markets not affiliated with MLS to join the league. The new league will consist of 20 clubs along with the potential for independently owned teams for the inaugural season in 2022. (Source)

“We are excited to launch a new league to complete the professional pathway between our academies and the MLS first teams. In addition to providing more opportunities for MLS-caliber players, the new league will develop a diverse talent pool of coaches, referees and front office executives while also attracting fans who previously were unable to support a local club in their hometown.” – Mark Abbott, MLS President and Deputy Commissioner

The Asian Football Confederation (AFC) has announced a media rights deal with True Corporation in Thailand to broadcast the AFC Club Competitions in the 2021 season. Fans will be able to enjoy extensive coverage of the AFC’s club competitions through TrueVision’s sports channels as well as via True’s OTT services. (Source)

The Japanese J League has reached an agreement with Sony Pictures Networks India for the broadcasting of the 2021 MEIJI YASUDA J 1 LEAGUE. Live broadcast of the Japanese League will now be available in India, Bangladesh, Bhutan, Afghanistan, Maldives, Nepal, Pakistan and Sri Lanka through both paid TV and OTT platforms. (Source)

Ligue De Football Professionnel’s (LFP) Board of Directors have granted Amazon group the rights to the bundles of the two Ligue 1 Uber Eats and Ligue 2 BKT. Amazon Prime has secured the bulk of the domestic broadcast rights to the top-flight Ligue 1 for the 2021/2022 to 2023/24 cycle. (Source)

“This decision, taken unanimously by the Board of Directors minus one abstention, allows French football to benefit from the arrival of a new major player, Amazon. The arrival of this new player alongside our long-standing partner Canal + promises the future for the future development of French professional football and the attractiveness of our competitions. “- Vincent Labrune, President, LFP

English Championship club Reading FC has revealed a new gaming community Royals Esports for its supporters, in partnership with New York-based enterprise Rival. Rival will power Royals Esports with its white-label enterprise platform solution that enables Reading to directly connect with and engage gamers with an immersive experience. (Source)

Ukrainian club FC Shakthar Donetsk has announced the formation of a team to play in the First League of the Ukrainian Women’s Championship in the 2021/22 season. The formation of a women’s team comes in accordance with the strategic plan for the development of women’s football in Ukraine for 2020-24.

Major League Soccer (MLS) club Inter Miami CF has debuted a first-of-its-kind “watch party” feature on its mobile application that gives fans the ability to enjoy Inter Miami’s matches while video-chatting with family and friends. The feature enables fans to conduct a group video conversation with up to eight friends while simultaneously viewing live match coverage. As the 2021 season moves forward, Inter Miami aims to add new functionality to the in-app experience including enhancements such as gamification, e-commerce and creative sponsorship integrations. (Source)

The Executive Committee of the Qatar Football Association (QFA) approved to adopt a new strategy for the QNB Stars League, the top flight football competition in Qatar from the 2023-2024 season. The new strategy will include:

The Asian Football Confederation (AFC) announced a multi-platform agreement with CBS Sports for exclusive rights to the AFC competitions in the United States of America. The agreement starts in September of this year through to 2024. Paramount+ will stream AFC club and national team competitions. CBS Sports Digital will deliver additional coverage and original programming and feature highlights across social channels and CBS Sports HQ. (Source)

“We look forward to working with CBS Sports in growing the fanbase of the AFC’s world-class competitions in the vibrant North American market as well as in the AFC’s territories in Guam and Northern Mariana Islands and we thank them for believing in the future of Asian football.” – Dato’ Windsor John, General Secretary, AFC

Italian Serie B club AC Monza has signed a multi-year partnership with The Football Business Academy partner Iterpro. AC Monza will use the services of Iterpro with the aim of digitizing information and administrative processes crucial for the management of the asset represented by its players. Monza will manage the entire contracts of players, agents, and staff through the platform, carry out market simulations, and financial analyses. (Source)

Arsenal Football Club has become the latest club to sign with The Football Business Academy partner Horizm. The agreement will see Arsenal use Horizm’s AI-powered platform to boost their returns on digital by gaining a better understanding of the value they can provide to current and future partners. (Source)

Scottish club Rangers FC has announced a £6,750,000 share offering providing supporters, and other retail investors with the opportunity to acquire ordinary shares of the club. Funds raised from the offering will be applied to projects designed to accelerate the financial sustainability of Rangers Football Club and the acceleration of the Rangers digital transformation strategy to improve supporter experience. (Source)

FIFA has announced the launch of a Fan Experience Panel, a global panel that will collaborate with FIFA’s Football Technology & Innovation team. The panel constitutes a group of 25 football fans (selected from the FIFA Fan Movement) from around the world that will be continuously consulted to help enhance the football experience on and off the pitch leading up to major tournaments and events. The members of the Fan Experience Panel will participate in a series of workshops, conduct beta tests for new technologies and innovations and attend virtual and in-person events to provide first-hand feedback and input to FIFA. (Source)

The Confederation of North, Central America and Caribbean Association Football (CONCACAF) announced a strategic link with Amazon that will allow Concacaf to sell official products of its main competitions, including the Concacaf Gold Cup, the Concacaf Nations League, and the Scotiabank Concacaf Champions League in international markets. The alliance is part of the positioning and brand consolidation strategy that Concacaf is carrying out to grow its commitment to all fans in the region and around the world. (Source)

The French Ligue 1 is to cut two teams from its competition in time for the start of 2023/24, taking the number to 18 clubs. The decision comes after the Ligue de Football Professionnel, LFP’s General Assembly voted 97.28% in favour of a move to 18 clubs in Ligue 1 as of season 2023-2024. At the end of the 2022-23 season, the change in format will be implemented by having four teams relegated Grimm Ligue 1 to Ligue 2 while only two clubs will be promoted from Ligue 2 to Ligue 1. (Source)

Previous post Brian Wesaala: The social and economic importance of soccer in the community is underestimated. Next post Hugo Chaillou: Apollon Limassol F.C, More than a Football Club