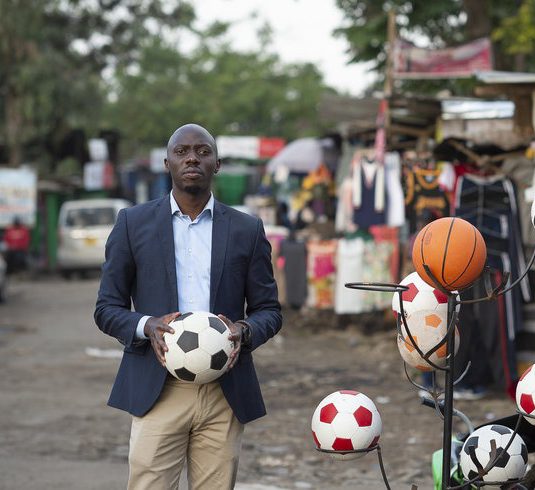 Brian Wesaala: The social and economic importance of soccer in the community is underestimated.

“I never had any ambition to move to Europe. I was born in Kenya, where I grew up and went to school. Like many teenage football fans, I dreamed of one day playing for my favorite club, A.F.C. Leopards. It was during my early studies in accounting at Strathmore University that I realized that I would not become a professional, although I continued to play at a good level.

After continuing my studies in computer science at the University of Nairobi, I got a job at the World Scout Bureau’s African headquarters in Nairobi. Ray Saunders, my supervisor, soon offered me a two-year contract at the Swiss headquarters of the NGO. I didn’t look for a way out, the opportunity just presented itself. So, in the summer of 2009, I left my country, flying for the first time. In Geneva, I immediately looked for a place to play football, and Ray Saunders directed me to US Carouge, active in the 4th league. I integrated quickly, I liked my life in Switzerland and I decided to stay. I found a job at the UN, the best option if you have an African passport in Geneva. I juggled a bit between contracts, I was happy with my job, the different training opportunities and the many contacts I made in different organizations. And I finally got a permanent position in 2015.

Paradoxically, it was also at this point that I questioned my career in IT. At 30 years old, I was not fully satisfied, both professionally and personally. I needed to find a more rewarding activity. And above all I wanted to get closer to my lifelong passion, football.

I started to read a lot about the sport, its industry, and even started a blog on the subject. In Geneva, a school had just been created, The Football Business Academy, and I decided to do a master’s degree there. These studies confirmed an impression that had been in the back of my mind since my early days at US Carouge: it would be extremely beneficial to set up in Kenya, and more generally in Africa, the type of infrastructure that is found everywhere in Switzerland, particularly at the amateur level.

Starting from the ground up

In 2016, I took advantage of my vacation to organize a first tournament in Nairobi, the “Obama Cup”. I saw the enormous potential for strengthening football at the grassroots level. In Africa, I think we underestimate the social and economic importance of this sport in the community. A lot has been invested in football on the continent, yet very few people are able to make a living from it. And that’s what I would like to change by investing in education, to explain how this industry works. We should not just train a handful of players for the European market; we should also focus on the majority of those who stay here by creating a better environment. You don’t need fancy infrastructure, just good functional structures. This kind of ecosystem can be put in place in Africa by proposing to investors to inject agents at the grassroots level, to complement the very vertical system of FIFA.

Gradually the idea came to me to launch a structure to embody these ideas: The Football Foundation for Africa. Which I officially inaugurated in 2018 during a tournament in Botswana, to show my ambition to reach the entire continent. In March 2019, I moved back to Nairobi to dedicate myself full time to this project.

Setting up such a structure in Africa, on the bangs of the powerful international federations, is not easy. At the beginning, I had difficulties in generating interest in my initiative in Kenya. I even imagined basing the foundation in Geneva, close to FIFA, UEFA or the IOC. But by finally choosing Nairobi, I have created an organization that is truly African. Of course, I still have a network and contacts in Geneva, which remains a strategic place in which to have a presence.

On a personal level, the transition was also difficult: changing careers, leaving my life in Geneva after ten years. When you explain that you are giving up a job at the UN to start a football career in Nairobi, you get little encouragement. I also invested my savings in it. At the same time, I’m really doing what I love. And more and more people are coming up to me and telling me that this initiative has the potential to change the mindset around the sport.”

Brian is an Alumnus of The FBA’s Professional Master in Football Business 2nd Edition. He can be contacted via LinkedIn.