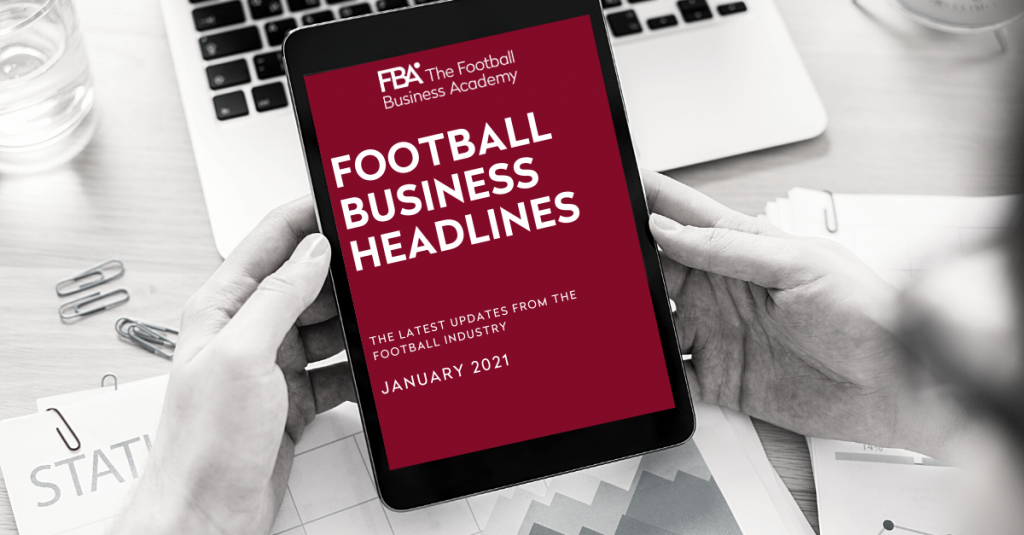 The Asian Football Confederation (AFC) has announced an official partnership with Switzerland-based company Sportradar. Sportradar will become the official video and data distribution partner for major AFC national team and club competitions for the cycles 2021-2024 and 2025-2028. (Source)

The Liga MX, the top professional football division in Mexico, has announced a partnership with Tecate to become the official sponsor of the competition. The multi-year deal will allow the Heineken-owned beer brand to access the Liga MX logos, team names, and images to support its marketing. (Source)

The United States Soccer Federation in partnership with Deloitte will organize a ‘SheBelieves Summit’ on February 11th and 12th which will take place virtually. The two-day summit will provide college students and young professionals the opportunity to gain valuable insights through panels and workshops focussing on the three core pillars of Confidence, Career, and Community. The summit is organized as part of US Soccer’s commitment to empower young women and girls and continue to grow the women’s game in the United States. (Source)

FIFA president Gianni Infantino met with the members of the women’s football development department of the Saudi Arabian Football Federation (SAFF) and with members of the national women’s futsal team during his visit to Saudi Arabia. An in-depth presentation was made on the strategy for the future development of women’s football in the country by SAFF Board Member Adwaa Al-Arifi and SAFF Women’s Football Development Director Lamia Baiyan. President Infantino offered his support for the development of the game in Saudi. (Source)

“Women’s football is now played in the country and we need to support its development. FIFA needs to work together with the SAFF in order to ensure a bright future for women’s football in Saudi Arabia” – Gianni Infantino, FIFA President

FIFA has launched ‘FIFA Sound’, a new entertainment strategy designed to create innovative and meaningful connections between football fans, music enthusiasts, players, artists, and the game. FIFA Sound will launch with an eight-episode podcast series hosted by famous singer Liam Payne and co-hosted by sports broadcaster Jaydee Dyer. In each episode, celebrated footballers will discuss definitive moments of their career through the songs that have provided a soundtrack to their lives. (Source)

“FIFA’s vision is to make football truly global, accessible, and inclusive. The crossover between football and music underscores this wider cultural relevance. Both are universal languages and have the power to create unrivaled emotions. It’s a natural fit to bring them together” – Jean-François Pathy, FIFA’s Director of Marketing

LaLiga North America and global sports agency ISL are launching ‘LaLiga Next’, a platform that will provide young American football players the opportunity to showcase their talent and start a professional career in a LaLiga youth club. The selected players will train and compete with the best clubs in Spain under the supervision of different technical directors from LaLiga youth cubs, who will recruit the best player from each age category to participate in a sponsored training camp with a LaLiga youth club. (Source)

Canada Soccer has announced that it has extended its Coach Education Program to include the Canadian Premier League (CPL) players to provide them with an opportunity to look at a future in coaching. As part of the program, each CPL club will be permitted to nominate up to five players and upon successful completion of all components of the course, the candidate will receive the Canada Soccer B Licence. (Source)

UEFA has released the 2021 edition of its anti-doping regulations updated in-line with the 2021 World Anti-Doping Code (WADC). New provisions have been introduced and the term ‘Aggravating Circumstances’ has been added to the regulations to describe special or exceptional circumstances for which an additional period of ineligibility of up to two years can be imposed. Substances of Abuse’ is another new definition that permits flexibility and this term encompasses those substances that are frequently abused in society outside of the context of sport. The regulations have also introduced a new ADRV which makes it an offense to either discourage someone from reporting information or to retaliate against an individual for sharing information. The new set of regulations can be downloaded here.

KPMG Football Benchmark released the ‘European Champions Report 2021’. The 5th annual edition of the report reviews and compares the most relevant business performance indicators of the champions of Europe’s six most prominent leagues in the 2019/2020 season. Key conclusions from the report are:

The full report can be downloaded here.

Premier League club Tottenham Hotspur has announced a multi-year partnership with cinch, one of the UK’s fastest growing online car selling platforms. cinch will become the club’s first official sleeve partner and its logo will be seen on both Tottenham men’s and women’s first team shirts. (Source)

Eredivisie giants AFC Ajax have announced a one-year extension of its sponsorship agreement with Netherlands-based cable operator company Ziggo. Ziggo will remain the main sponsor of Ajax teams, including their esports team, till 2023. The partnership will also focus on creating exclusive Ajax content on Ziggo Sport in the coming years. (Source)

Construction has started on the $900m (€733m) estimated esports facility in Shanghai named The Shanghai International New Cultural and Creative E-sports Center. The facility is expected to become the global capital of professional gaming and will cover more than 500,000 square meters and will include a hotel to accommodate international gamers, a 6,000-seater esports arena, and a museum dedicated to gaming. (Source)

The Royal Moroccan Football Federation (FRMF) will implement a national strategy to triple the number of women and girls playing football. Players of the women’s senior team will have professional contracts and minimum wage standards will be implemented for players of the first and second division and for the coaches as well. (Source)

Manchester City Women’s Football Club has announced a long-term partnership with fashionwear production house Salento Creazioni Moda. As part of the partnership, the English team will wear a limited-edition hand-sewn collection for their Manchester Derby match in the FA Women’s Super League. Furthermore, there will be a number of fan engagement activities and bespoke content featuring members of Manchester City Women’s first-team squad.  (Source)

TSG Hoffenheim is one of the first German Bundesliga clubs to operate its website in a club in a climate-neutral manner. Carbon dioxide emissions resulting from the operation of the club website homepage is now offset in climate protection project in the Democratic Republic of Congo. (Source)

“ ‘TSG is movement’ is a lived strategy. After we have already offset all emissions that arise in the immediate vicinity of TSG, we are looking forward to this next step, which will be followed by others in the future” – Denni Strich, Managing Director of TSG Hoffenheim.

The Asian Football Confederation (AFC) has announced a major rebranding of its national team and club competitions. The AFC Asian Qualifiers, AFC Asian Cup, AFC Women’s Asian Cup, AFC U23 Asian Cup, AFC Champions League, and AFC Cup are all now rebranded with new logos. The rebranding was managed together with the AFC’s exclusive commercial partner Football Marketing Asia (FMA) over a 15-month period and was informed by deep stakeholder collaboration and extensive consumer research across Asia. (Source)

“We are delighted to start the new year with all-new AFC national team and club competition brands. The AFC strives to make its competitions even more relevant for its diverse fanbase while showcasing their unique reputation as Asia’s most popular football events. I am convinced the new visual identities will resonate strongly across Asia and worldwide, and I am looking forward to the new look and feel across social media and TV broadcast.” – Shaikh Salman bin Ebrahim Al Khalifa, the AFC President

Football Australia and Australian Professional Leagues (APL) announced the termination of the Australian A-League and Westfield W-League licenses held by Newcastle Jets Club. A new license has been issued to an entity owned and controlled by a consortium of existing APL club investors. The club later announced that the consortium is led by Sydney FC, Western United FC, and Western Sydney Wanderers FC. (Source)

The Major League Soccer (MLS), in December, notified the Major League Soccer Players Association (MLSPA) that it intends to invoke the Force Majeure Clause in the Collective Bargaining Agreement (CBA). However, ‘SportBusiness’ reports that the MLS has submitted a revised labor agreement to the MLSPA which would not require any further pay cuts to players but extends the current CBA by two years to 2027. (Source)

Major League Soccer (MLS) club Columbus Crew SC are nearing the completion of new downtown stadium. Last week, the club installed the final piece of the steel canopy and structure for their new ground. The new Crew Stadium remains on schedule to open in July 2021 and is expected to seat 20,000. (Source)