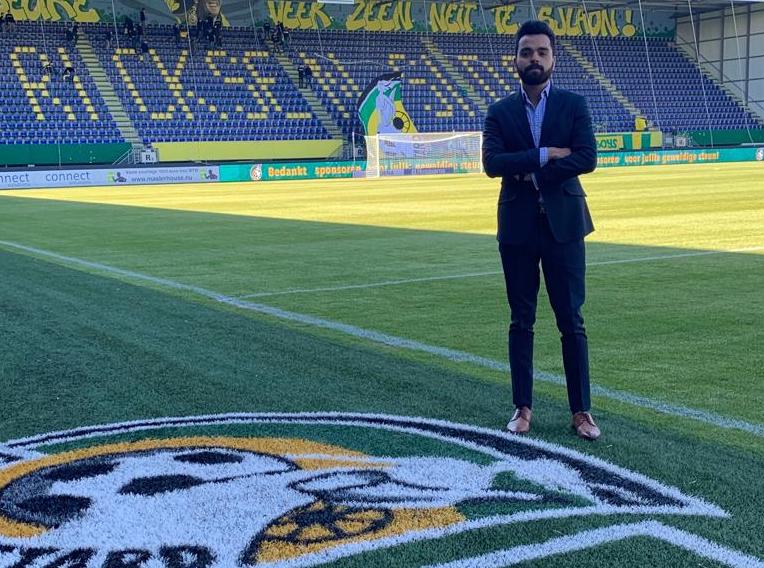 ” They said that an internship is what you make out of it and my experience was a living example of this, one which would not have been possible without Fortuna Sittard & The FBA.”

The countries that I’ve spent most of my life in – India, Singapore and Australia – have their sporting landscapes dominated by sports such as cricket, rugby, Australian footy, etc. This meant that the opportunities I had to make a career out of my passion for football, were always limited. Having studied Business Administration, I kickstarted my professional career in Sydney. I worked at The Prospect Shop, an Equifax company, as a Consultative Account Manager. My role revolved around working with a wide portfolio of clients, helping them source data for their marketing campaigns. This was a turning point in my career as it not only helped me develop soft-skills required in the professional world, but also helped me realise the increasing importance of data for organisations in the modern era. After a two-year stint with the company, it was time to think about moving closer to where I always wanted to be, when I stumbled upon the Professional Master in Football Business at The Football Business Academy. The three factors I considered before signing up for The FBA were – the flexible structure of the course, the guaranteed internship on offer in the third module and the people that form a major part of the culture within The FBA Family.

The first two modules, although online, laid a solid foundation by providing an overview of the football industry. These were six months of rigorous online classes, group work, submissions and some traveling, as we attended Soccerex in Miami. These modules also gave us a fair idea of where we wanted to be for our internship in the third module. While there was a wide range of partners that we could potentially work with, it was always going to be a challenge for The FBA to place every candidate in the organisation of his/her preference. I was extremely lucky to be able to secure an internship at Fortuna Sittard. I had my eyes set on this club from the first module, when we studied Financial Strategy in Football under the guidance of Prof. Isitan, who is also the Chairman of the club.

Fortuna Sittard plays in the Eredivisie, the top division in the Netherlands. Although the club has experienced a rollercoaster journey over time, it has been successful in the last couple of years, both on and off the pitch. The new management at the club has revamped the structure and added a level of professionalism, that Fortuna fans have never seen before. My role at the club was that of a Data Analyst, responsible for fan engagement initiatives, which meant that I was exposed to various departments depending on the task at hand – customer service, ticketing, marketing, social media and communications. Given the competitive landscape of the Eredivisie, it is a challenge for clubs to compete with the big guns like Ajax, PSV & Feyenoord, who boast considerably large fanbases. However, the people at Fortuna were always open to new and innovative ideas, as long as they were aligned with the identity of the club, making my role more hands-on. I was able to present numerous initiatives which my colleagues were always willing to discuss, and this not only contributed to my overall learning experience, but also motivated me to think outside the box. The team made sure that I was involved in a few important projects but the one that stood out was the WhatsApp project, as we became the first club in the Eredivisie to launch WhatsApp as a communications tool to engage with our fans. The response to this project from the fans, the stakeholders of Fortuna, other clubs in the Netherlands and also from the KNVB (the Dutch football association) was very positive and it added to the ongoing development of Fortuna Sittard. I still feel proud every time I receive content on the official club WhatsApp account. In addition to this, I worked on coming up with ways for the club to gather data on fans – both declarative and behavioural, which could then be used by the club as an attempt to generate more revenue. This project involved formulating an end-of-season fan survey, designing competitions for the club social media channels and also using the club app to better understand fan behaviour. The reward for all the work that went in during my internship was the glamourous world of football I gained access to – where players would be walking in and out of the office on a regular basis, and the home & away matches that I could attend with the club staff, giving me more opportunities to expand my network.

None of this is to say that I did not face any challenges during my internship – the language barrier made it harder for the club and for me to exploit my full potential, adapting to a new culture in the Netherlands was never going to be easy for my first time ever in Europe and being away from family & friends always creates a void. However, I took these challenges as hurdles that I had to cross in order to reach my end goal of getting a foothold in the football industry. The people at Fortuna Sittard were very warm and welcoming. They made themselves available for me, regardless of the day and time. As such, along with the work experience, the time I spent at Fortuna Sittard and the people I met will always be very special to me. The club is the life of the city of Sittard and I feel privileged to have made a contribution to its development in my own little way. They say that an internship is what you make out of it, and my experience was a living example of this, one which would not have been possible without Fortuna Sittard & The FBA.

Prathamesh Tiwari is a Candidate of The FBA’s Professional Master in Football Business 3rd Edition. He can be contacted via LinkedIn.