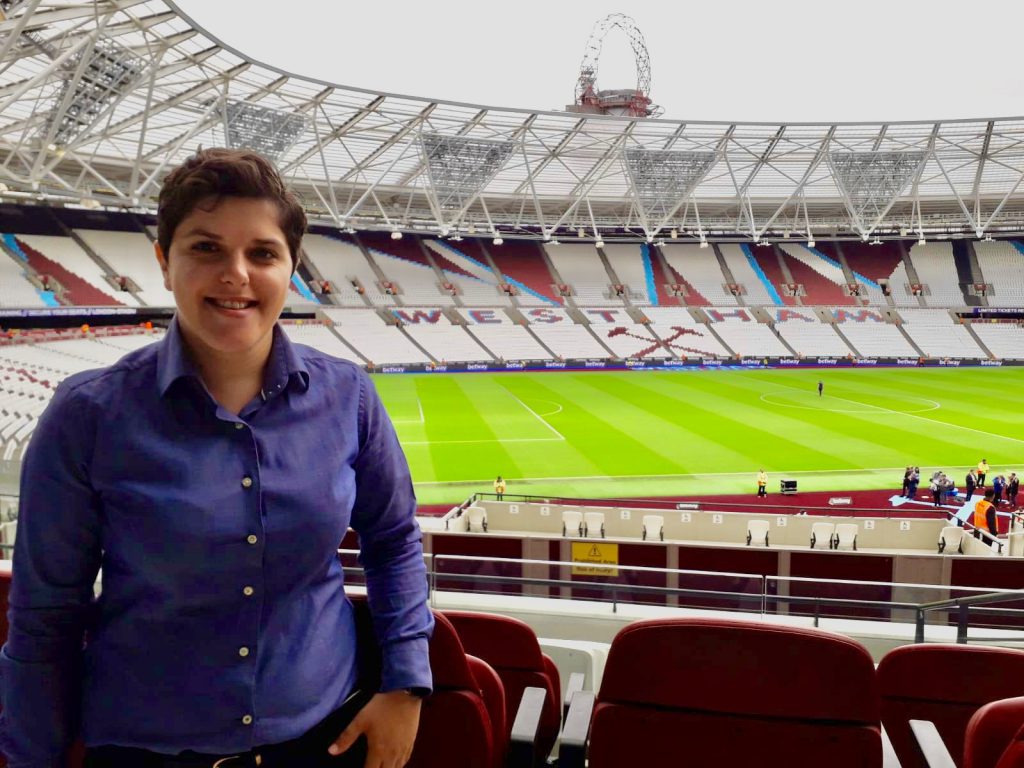 #MyInternshipAt… Cátia Silva takes us to Women in Football

Football has always been a huge part of my life and I had the dream of working in football. Everything I did when I was young was related to football, following my small local team and also the club I support – SL Benfica. My life was full of football, from Monday to Sunday following and supporting the teams I love. I was born and raised in a patriarchal society, the dream of working in football slowly disappeared since it was unusual for a girl/woman to work in football, but my passion for the game was always alive.

During my bachelor’s degree in Portuguese and Lusophone Studies, I took a new challenge – I undertook a refereeing course and was a referee for one season. My football passion transitioned from the stands to the pitch.

Without time to conciliate my studies and refereeing, I abandoned the profession and focused on finishing my Master’s in Cultural and Literary Mediation, where my area of specialization was Digital Humanities. With this specific background, finding a job in Portugal was a difficult task and I was ready for new adventures. Therefore, in 2016, I moved to Switzerland.

A new country, a new language, a new life. I started from the bottom, working in another industry for several years, but the dream of working in football was always there until I discovered The FBA. It was the perfect opportunity to start chasing my dream.

With a humanities background, my focus at the beginning of the Master’s was on the history of football and how we can adjust to the “new” business era. However, everything changed when the Women´s Football Development classes started. Despite being a fan my whole life and a referee for a year, I was never into “Women’s Football”, but these classes and obviously the 2019 FIFA Women’s World Cup, changed my perspective about it. Since then, I was a woman in football caring about women´s football and was determined to develop and excel the game in Women’s Football.

One of the many signs of success of women´s football is the stadium attendance at every game, especially the ones taking place at the bigger stadiums. I was privileged to be a part of historic moments during my internship. Being part of the crowd at the London Stadium for the West Ham United v Tottenham Hotspur game and at Anfield for the Liverpool v Everton game, was a big pleasure and a proof of certainty that the game is growing every week. The Liverpool game was very special to me as one of my dreams was to visit Anfield and watch a Merseyside Derby.

The Lionesses (England) v Germany game at Wembley was the pinnacle of the football experiences of this internship. 77,768 people attended a women’s game! A historic moment in England and the atmosphere in the stadium was unbelievable. The joy on the kids’ faces and the excitement of the crowd was proof that the next generation is secured and the game will be bigger in the future.

To every girl out there: football can be your place, work hard and believe in your dreams. Everything is possible.

Cátia Silva is a Candidate of The FBA’s Professional Master in Football Business 4th Edition. She can be contacted via LinkedIn.