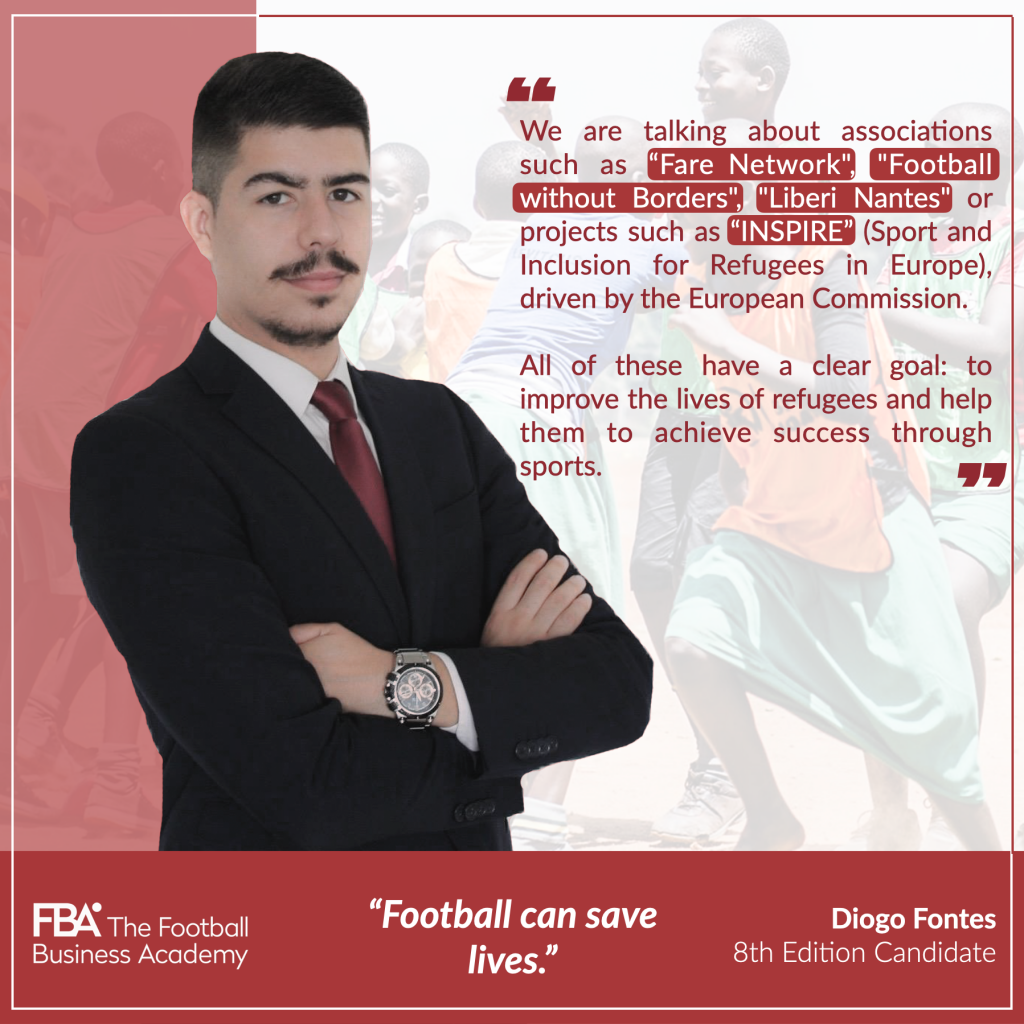 Diogo Fontes: Football can save lives

The 1950s were a decade full of milestones. We could talk about various themes such as the Korean War or Uruguay’s heroic victory in the 1950 World Cup in Brazil.
However, we want to highlight that 70 years ago, the 1951 Refugee Convention was adopted by the UN. According to the most recent one, “refugees are persons who are outside their country of origin for reasons of feared persecution, conflict, generalised violence, or other circumstances that have seriously disturbed public order and, as a result, are in need of international protection”.

70 years on, much has changed, nevertheless, refugees continue to appear as mistreated figures in need of support. According to the United Nations Refugee Agency, 82.4 MILLION people were forcibly displaced worldwide by the end of 2020 as a result of persecution, conflict, violence, human rights violations, or events that seriously disrupted public order. It is a thought-provoking issue, especially when we see that 68% of these people originate from just five countries (Syrian Arab Republic, Venezuela, Afghanistan, South Sudan and Myanmar).

It seems clear that it is necessary to look for solutions to this scourge. And that is where sport, and more specifically football, comes in.

The wonderful game that goes by the name of football is a fantastic tool for making change. The number of people who play football on our planet is inestimable. From the poor to the rich, young and old, football brings incredible changes in people’s lives, leading to a promotion of peaceful values for the resolution of conflicts. In essence, it is a tool to ensure that all those who watch it, practice it, love it, do so in a healthy way, with good values prevailing.

It is important to note that football’s power to alleviate the lives of refugees is essential. In fact, football, as a team sport, is intrinsically rich in developing life skills. And there is no shortage of successful examples that help to prove the positive role that football plays in the life of a refugee. World-renowned athletes such as Alphonso Davies, Nadia Nadim, Granit Xhaka, Xherdan Shaqiri, Victor Moses, Christian Benteke, and Dejan Lovren – among many others – are players who have a common denominator in their past: the fact that they were refugees at some point in their lives.

Alphonso Davies (who was born in a refugee camp in Ghana) was the very first football player to be appointed as an ambassador for the United Nations High Commissioner for Refugees (UNHCR).  He even helped launch a Canadian Government campaign to promote access to quality education for refugees and participated in several fundraising games. He has several times, highlighted the role that various associations/projects played in his arduous path to becoming a football player.

We are talking about associations such as “Fare Network”, “Football without Borders”, “Liberi Nantes” or projects such as “INSPIRE” (Sport and Inclusion for Refugees in Europe), driven by the European Commission. All of these have a clear goal: to improve the lives of refugees and help them to achieve success through sports.

UEFA, on its turn, did not overlook the plight of refugees by signing a Cooperation Protocol with UNHCR in May 2021. The two organisations committed to establishing long-term initiatives to support refugees and forcibly displaced persons, taking advantage of the transformative power of football to assist and enforce their rights and strengthen their integration into host communities. The main objective of this signed protocol is to ensure access to football for all refugees (without distinctions of any kind).

The world seems to have realised that football can be a powerful force in these people’s lives. The question that must now be asked is: what should be the next step in this mission?

There is no linear answer to this question. The world is constantly evolving. Every day we are presented with events that change our lives.

However, it seems that the kick-off has been given. The power of football to combat a problem such as the exponential increase in the number of refugees has been recognised. An example of that is all the aforementioned UNHCR movements converged with elements from the world of football (be it players or associations). And the consequences are clear. Thousands of players have been assisted by these associations.

How can we do this?

Supporting the initiatives of associations such as the Fare Network. A recent call for experts on refugees and football was aimed at appointing six experts in refugee inclusion and sport as part of the EU-funded INSPIRES project. There are many other ways in which you can help. Be it through grants, paid memberships, civil society movements or simply by reporting discriminations.

All these initiatives have one goal: to convey a positive image of what football is and its ripple effect in the benefit of bigger fights as well as to spread the values present in football such as unity, team spirit, solidarity, and honesty. And in the process, combat movements contrary to the spirit of football, which corrupt its inherent values.

Only this way can we make our contribution towards mitigating this crisis. Are we going to score the goal and win this match?

Diogo Fontes is a Candidate from the 8th Edition. You can contact him on LinkedIn.