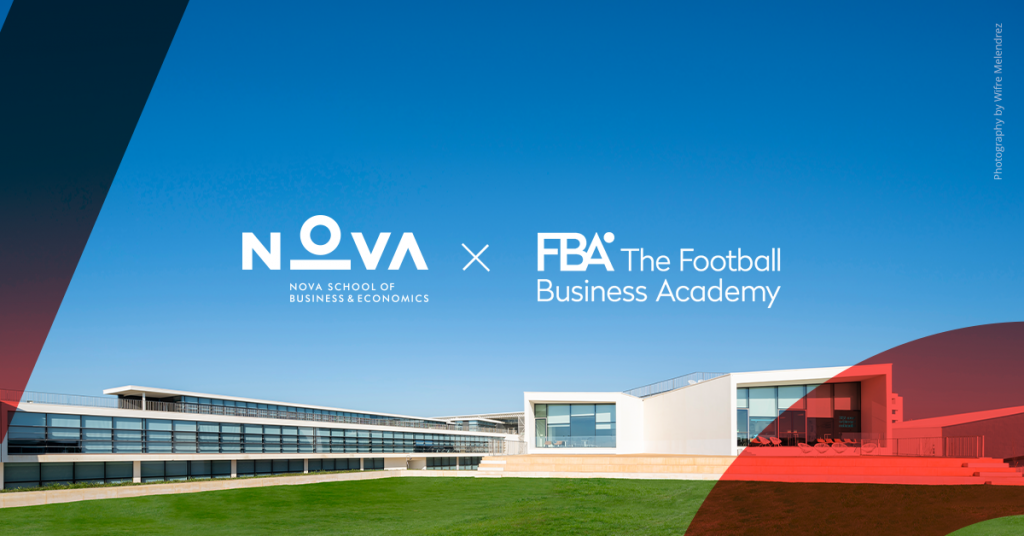 The FBA signs MoU with Nova School of Business & Economics

The Football Business Academy and Nova School of Business & Economics have entered into an agreement that will see the Swiss educational institution and the Portuguese school collaborate.

“This partnership with The Football Business Academy reinforces the international recognition of Nova SBE. Moreover, it is aligned with our strategic goal to establish innovative partnerships with organizations that are at the top of their field, in areas that are often not associated with business school – in this case The FBA. In a world of dramatic change, these interdisciplinary partnerships are key to sustain competitive advantage through innovation.”

“This partnership with Nova School of Business & Economics is a very important milestone for The Football Business Academy. Joining forces with one of the most innovative business schools in Europe will enhance the experience for our Candidates in many ways. We listened to our Alumni and, together with the entire FBA Family, realized this was the best way forward. I’m very much looking forward to see the reactions of our first Candidates who will step foot on Nova SBE’s beautiful campus this summer.”

The FBA has signed a Memorandum of Understanding with Nova SBE. The agreement is designed to bring a part of The FBA’s Professional Master in Football Business to Nova SBE’s campus, while also foster the exchange of know-how and intercultural experiences.

In its 40-year history, Nova SBE has become Portugal’s top brand in higher education and has developed a reputation for having a mindset of innovation and excellence. They are part of a select group of business schools which have the Triple Crown Accreditations – EQUIS, AMBA and AACSB. Indeed, less than 1% of the world’s business schools have this highly recognized education standard.

This partnership represents a unique opportunity for FBA Candidates as they will have the privilege of studying in one of the most beautiful and innovative campuses of Europe for two months just outside Lisbon, while still being part of a top educational institution that follows high-quality Swiss standards.

The decision was made following a process of surveys and discussions with FBA Alumni who shared their feedback on the entire FBA experience. By moving Module 4 from Geneva to Lisbon, it became apparent that the FBA Candidates would benefit in countless ways. Having access to a modern 90,000 square meter campus such as the one Nova SBE has will enhance the experience significantly. Nevertheless, FBA Candidates will still be able to live the Swiss experience thanks to a dedicated program of Field Trips and special activities in Switzerland. The previous three modules of The FBA program will remain consisting of two online modules and one internship module.

For Nova SBE, joining forces with The FBA creates numerous opportunities to continue their efforts to become more international. Despite its young history – 3 years – The FBA has developed a strong reach covering all continents. Thanks to a digital recruitment strategy and long-lasting partnerships and relationships with football industry stakeholders, The FBA’s global recognition is growing each day and helping graduates to land jobs at places such as adidas, Paris Saint-Germain, UEFA, Galatasaray and Atlanta United.

Nova School of Business & Economics has become the top brand in higher education in Portugal, namely in the areas of business, economics and finance. The school’s mission is to be a community dedicated to the development of talent and knowledge that impacts the world, striving to reach a more equitable, sustainable and peaceful world. Other partners of Nova SBE include the University of Chicago and the Portuguese Football Federation.

The Football Business Academy is a Swiss-based high level international educational institution whose goal is to professionalize the management of the football industry and facilitate the insertion of qualified professionals and future leaders in the game. Its flagship program, a Professional Master in Football Business, was co-developed with international football industry experts from around the world around one foremost objective: to provide Candidates with all the necessary tools and an optimal learning environment in order to succeed in this passionate and dynamic industry. Other partners of The FBA include Benfica, Soccerex, Brighton & Hove Albion, Common Goal and Olympique Lyonnais.