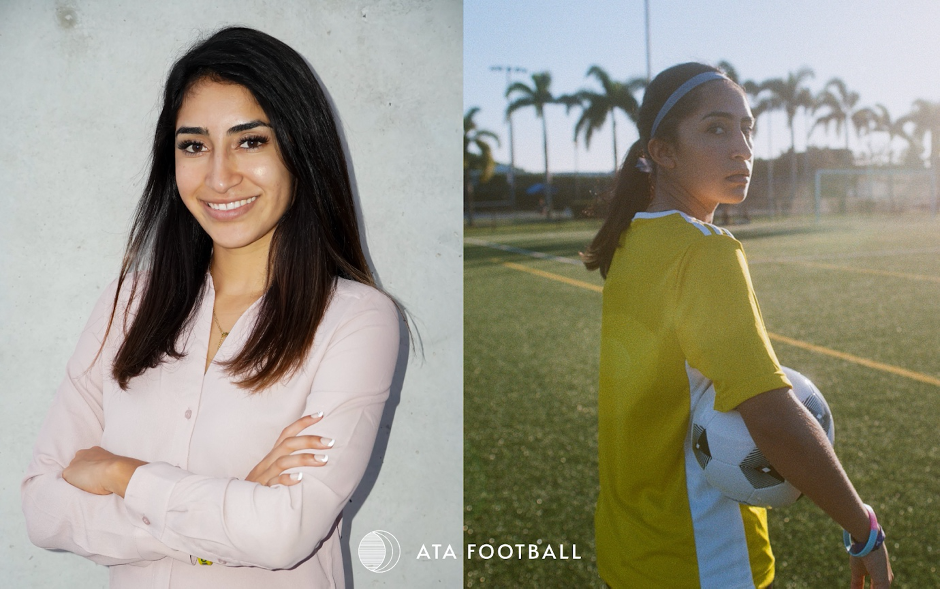 “I now have an even bigger passion for the game and a huge admiration for everyone at Atalanta Media and for putting women’s football center stage.”

I was born in Bogotá, Colombia and moved to Miami, Florida at the age of 10 years old. Due to the lack of accessibility and acceptance for females to play football in Colombia at the time, I never thought I’d have a career or even a future in football. I always found myself to be the only girl playing and at times, especially in school, I wasn’t even allowed to play because it was considered just a “man’s game”. However, that didn’t stop me from playing it with little boys in my neighborhood and at family events with the males in my family.

My father never thought he would watch me, his daughter, play at the stadium he always dreamed of playing at for Independiente Santa Fe, his beloved club.

In July 2005, we moved to the United States of America. All of a sudden, it was acceptable for me to play football at school and I wasn’t the only girl playing it. I joined an all girls club team at the age of 12 and that is when my football career started. My talent, hard work, love and strong passion for the game drove me to play for the Colombian Youth National team in 2014 playing at the World Cup Qualifiers in Uruguay. I then attained a scholarship to play for Florida International University, a Division 1 NCAA program. I played in the University from 2014-2018, graduated with a Bachelor’s degree in Recreation and Sports Management, a minor in Marketing, and two internships in the Sports Marketing field. After graduating, I wanted to keep playing and I got the opportunity to play in Colombia professionally for the club Independiente Santa Fe in the 2019 season. This was one of the most special experiences I’ve had because I was able to bring my family in Colombia together, challenged the stereotypes they had associated with the women’s game and fulfilled my father’s childhood dream. He never thought he would watch me, his daughter, play at the stadium he always dreamed of playing at for Independiente Santa Fe, his beloved club.

At CONCACAF, I quickly learned that what I had experienced in Colombia, both as a little girl and as a professional, was happening in a lot of other countries.

However, after experiencing the reality that professional female players face in Colombia in terms of dealing with stereotypes and lack of support in all aspects, I decided to expand my education in football business to make an impact in the women’s game globally. I joined The FBA at the beginning of 2020 while having another great opportunity to intern for CONCACAF in the Women’s Football Department from January to April. At CONCACAF, I quickly learned that what I had experienced in Colombia, both as a little girl and as a professional, was happening in a lot of other countries. There was a lack of support, visibility, accessibility and investment amongst other things but CONCACAF, with Karina LeBlanc as the Head of Women’s Football, was working hard towards making efforts in changing this. I immediately became inspired by their strategy with their vision of “changing perceptions, building sustainable foundations and growing participation” in the women’s game.

I also quickly learned that everyone in The FBA family wants us to succeed and they do a great job at providing all the necessary tools that we need in order to do so.

In March 2020, I started the first modules with The FBA. I was extremely pleased and impressed with all the lessons from the professors and the guest speakers. All of them are experts in their field and are able to prepare us exceptionally well for our careers as professionals. In the courses, the professors not only teach us about the course but they are open in answering all our questions, share with us their experience, give us insights, and give us valuable advice that will help us in our career. I also quickly learned that everyone in The FBA family wants us to succeed and they do a great job at providing all the necessary tools that we need in order to do so. They are there with us every step of the way, even when a big challenge occurs, such as the pandemic.

In spite of this big challenge everyone was facing due to COVID-19, Marcin Chmielewski (Partnerships Manager), Boris Groselj (Chief Operating Officer) and Kristian Dobrev (Chief Partnerships Officer) were constantly checking up with me and helping me find an internship opportunity that would best fit me. They connected me with various people and as soon as The FBA told me about the opportunity to intern for Atalanta Media I became eager and extremely excited. I was thrilled to be a part of a company who shares the same aspiration as me… to elevate the women’s game globally. It was the perfect fit.

My internship experience at Atalanta Media has been one of the most rewarding and gratifying.

Atalanta Media and their consumer brand Ata Football launched in September of 2020 with the mission to elevate women’s football and unite a global community. It’s a women’s football broadcaster & company devoted to not only elevating the sport but also its players by addressing the fundamental need for accessibility and visibility. They invested in acquiring the FA WSL and D1F live TV rights with other leagues to follow and are ensuring and facilitating premium broadcast for all their leagues. The Ata Football platform, www.atafootball.com, gives fans, coaches and players access to live, on-demand, highlights from the world’s best, and premium content. Its goal is to build a community around women’s football and to provide them with unforgettable, valuable opportunities and experiences associated with the game.

Atalanta Media is supported with seed capital and technology resources by 777 Partners which is an investment firm based in my hometown, Miami, FL, however we all worked from home because of COVID-19. I joined Atalanta a few weeks after their launch which meant I had to get up to speed with their fast workflow, adapt quickly and help as much as I could in different fields. However, Esmeralda Negron, Atalanta’s Co-Founder and my supervisor, along with the rest of my coworkers, guided me and helped it be a smooth transition. I was given the main task of doing market research and leading youth and collegiate marketing outreach initiatives. Additionally, I helped in creating ambassador programs, sponsorship decks, proposals as well as helping with social media and analytics. One of the tasks I enjoyed the most was being able to learn and use different programs such as Adobe XD and Grabyo. I was in charge of creating graphics for their platform weekly and for their social media platforms through the templates given to us on Adobe XD.

My internship experience at Atalanta Media has been one of the most rewarding and gratifying. Esmeralda Negron was more than my supervisor, she was a mentor and I will always be appreciative of her guidance and support through my whole experience. From weekly meetings to working on several projects and being challenged to work in different fields, it all has expanded my knowledge in football business. This has also inspired me to continue to pursue the path in working for companies, clubs or organizations that are making an impact in the women’s game. I now have an even bigger passion for the game and a huge admiration for everyone at Atalanta Media and for putting women’s football center stage.

Paula is a Candidate of The FBA’s Professional Master in Football Business 6th Edition. He can be contacted via LinkedIn.

Previous post The FBA and Coaches Across Continents Join Forces Through Educational Partnership Next post Dimitri Lecorps: My Internship At Mazatlán FC