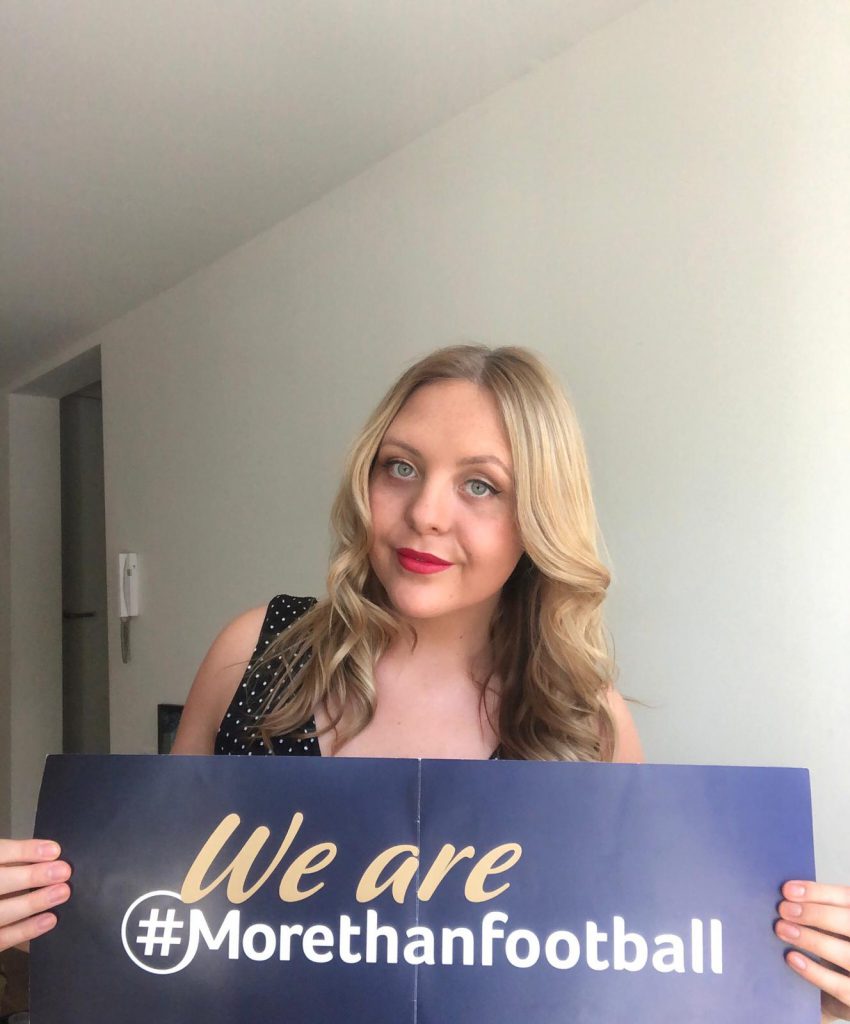 Before joining The Football Business Academy, I am proud to say that I built up over 3 years of experience in the football industry covering academia, coaching, team and tournament organisation, business strategy and marketing. Having obtained a First Class Honours Degree in ‘Sports Business and Coaching’ as well as working with Football Associations and Football Teams from National to grassroots level, I seek to use the combination of my experiences, skills and passion for football to build a career whereby I can make a positive impact through the sport.

I have always been open-minded to new opportunities in the industry because I want to ensure that I can continue to grow and be competitively employable after my studies, which is one of the main reasons as to why I joined The FBA. Since becoming a 5th Edition Candidate in September, I have been able to advance my knowledge of football business significantly, by learning from the highly specialised Professors throughout Modules 1 and 2. The whole process has been incredibly stimulating and I absolutely love being part of The FBA family because I have such an excellent support network, from the professors, staff, my classmates and Candidates from previous editions.

When exploring internship opportunities as part of Module 3, Kristian (the Chief Partnerships Officer) and I discussed the prospect of working at the European Football for Development Network. Instantly, I felt like it was the perfect place for me to go so that I could combine both my passion for football and social change, collectively!

The European Football for Development Network (EFDN) is a not-for-profit organisation that supports more than 90 professional football clubs, leagues and FAs across Europe, to promote the connecting power of football as a tool for social development, supporting the efforts of its network members in their initiatives to use football to reach out to various target groups in their communities. At the EFDN, together with its members and partners, they are aiming at working towards new milestones in CSR in football. With having the same moral values and goals, I was honoured to join the team.

My internship with the EFDN started in January and will continue through till the end of June, followed by undertaking Module 4 of the course, in Portugal – which I am incredibly excited for! Currently, I am living in Breda, which is a beautiful, small city in The Netherlands. I’ve always wanted to venture abroad to work, to get out of my comfort zone and gain more life and learning experiences because if there’s one thing that I’ve learned, it’s those ‘out of comfort’ zone experiences that enable you to grow as a person.

In my role as a ‘Communication Support Officer,’ I work alongside my Marketing Manager and a fellow intern. Together, we carry out all day-to-day marketing and communication activities, which include liaising with the EFDN members and all related brand operations. Overall, my role is to help promote and elevate the profile of EFDN through traditional, digital and social media, helping to further the development of the EFDN’s online media communications.

The EFDN focuses on contributing to the achievement of several Sustainable Development Goals (SDGs). During my time so far, I have supported this process by assisting the Project Management Team with the production of project, mid-term and final reports, as well as best practice reports. This has enabled me to see the behind the scenes work that goes into project application and the positive effects these projects have within the community. As a result, I can identify best practice examples of EFDN projects that have been implemented successfully in different environments such as Welcome Through Football, Community Champions League and SIDFOOT to name a few, observing how they have helped target groups. For example, the Welcome Through Football project’s facilitators used football activities and workshops effectively to aid the process of the social inclusion, integration and acceptation of refugees in their region, from the ages of 7 through to 25 years old. Whether it be through seizing the opportunity to become a referee, youth coach or undertake voluntary tasks at the facilitating club, all involved were able to make a big step towards being an equal part in society.

The first months of my internship primarily consisted of planning for the #Morethanfootball Action Weeks campaign, which is supported by the UEFA Foundation for Children and the European Club Association (ECA). The ‘More than Football’ Action Weeks are the perfect platform for the European football landscape to showcase and celebrate the impact of their community and social responsibility activities and programmes on a local, national and international level, whilst informing and engaging with fans and stakeholders to ultimately, raise awareness of the transformative role football can play in positively changing peoples’ lives. This is achieved by organisations using the #Morethanfootball visuals and resources, in any innovative way they choose! For example, they can communicate these via match-day activities, digital campaigns and the use of banners, billboards, posters and brochures.

During the planning process for the Action Weeks, I worked on the content for the ‘Tool Kit’, which clubs can use as a guide to access information on all of the activities, resources and visual materials. This features the ‘Action Days’ schedule, whereby participants are encouraged to contribute to each day wherever they can, to showcase their CSR work. Throughout this process, I compiled several ideas together for clubs to use as inspiration, particularly through traditional media methods, including a script for the #Morethanfootball Action Weeks 2020 video. The purpose of the video is to show how clubs’ players, fans, staff and participants of the clubs’ projects and programmes are, why they believe, “more than football.”

In addition to planning for the Action Weeks, I worked on the preparation for the 14th ‘More Than Football’ Conference. This included designing and creating content for the conference programme as well as the communications of the event, across all EFDN social media channels. The conferences are EFDN’s flagship event and the largest gathering of CSR-experts in European football. They allow practitioners, project leaders and decision-makers from community-engaged professional football organisations the opportunity to share best practice examples, ideas and solutions, and new initiatives, on issues such as racism, gender inequality, social inclusion, sustainability, fundraising as well as youth crime.

Unfortunately, due to the current COVID-19 crisis, it was decided that the #Morethanfootball Action weeks will be postponed to a later date this year. And, that the 14th EFDN “#Morethanfootball” Conference, hosted by NAC Breda at Rat Verlegh Stadium, will be postponed to the 10th & 11th of November 2020. Although I would have completed my internship at this stage, I hope to take a trip back to Breda to attend the event that I had assisted with the preparations for.

With the COVID-19 crisis destabilising communities all over the world, we decided at EFDN to take action and do our bit to help! On Tuesday, 17th March, the European Football for Development Network officially launched the ‘Supporter of Each Other” campaign together with several clubs and other football organisations. We came together as a team and discussed how Football has the power to bring people together, regardless of their cultural and language differences. The sport breaks down barriers that divide us from one another and it can be a powerful tool for social development, even in the state of crisis!  This inspired the initiative of the concept that we all need to stand together and become a #SupporterofEachOther. The goal of this new campaign is to inspire people, players, fans, clubs, leagues, FAs and all organisations to support each other to overcome the current COVID-19 pandemic.

The state of affairs means that we are currently working from home, but each day, we are communicating tips and initiatives via the ‘Supporter of Each Other’ social media channels. Through these platforms, we inform users about the activities and initiatives taken by people, players, clubs, leagues and FAs from all around Europe to help stop the further spread of the virus. Furthermore, we publish advice on staying healthy and socially active at home, as well as emphasising the importance of looking after each other. In addition to this, Supporter of Each Other also encourages everyone to contribute to fundraising initiatives.

During the first few days of launching the campaign, more than 180,000 people viewed our posts, and in the first week alone, we had more than 1.2 million impressions. On Facebook, we reached more than 800,000 people as well as reaching more than 53,000 impressions on Twitter, and our website gained 4500 unique users in the second week of launching. Each week, we are seeing more organisations join the campaign. Currently, we have 80 official ‘Supporters’ in total, including the Premier League, La Liga and clubs such as Everton, Burnley, PSV Eindhoven and SL Benfica. All of the supporters can be seen here.

You never know where these opportunities and networking experiences can lead you, so it is vital to make the most of every experience and seize new opportunities with both hands! I am very proud to be carrying out my internship for an organisation that uses the power of football to make a positive difference within communities across Europe and I cannot wait to put my experiences and education from my FBA journey so far to the ultimate test during Module 4. As the course comes to a close, I am excited at the prospect of continuing to educate myself and work hard to pursue my dream of being a Premier Football Businesswoman, but most importantly, being one who uses the power of the beautiful game, for the greater good.

Georgina Slawinski is a Candidate of The FBA’s Professional Master in Football Business 5th Edition. She can be contacted via LinkedIn.